Copper (In Our) Veins: The Coniston Coppermine Trail 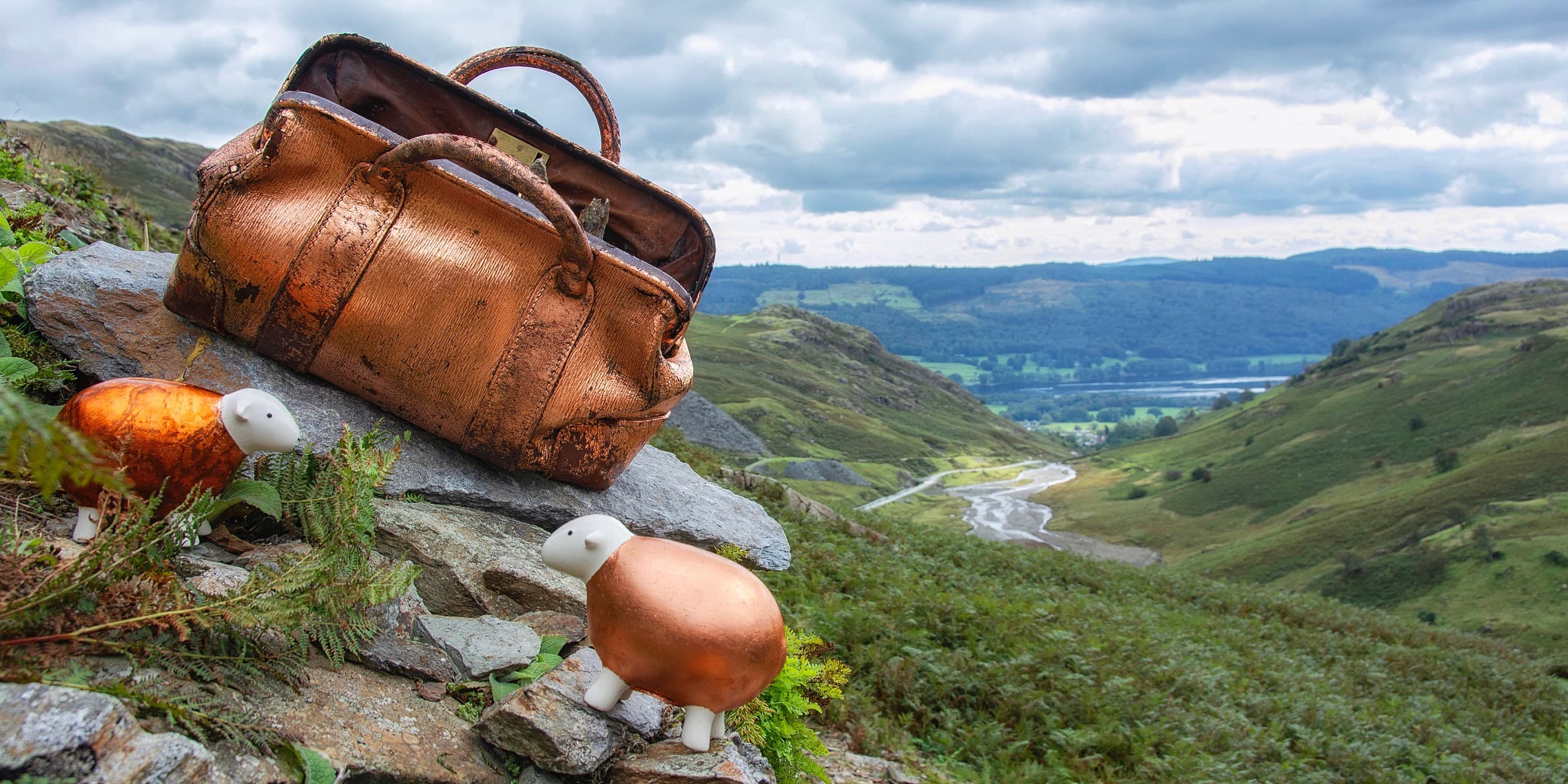 When you think of Coniston you might be reminded of: Coniston Water, Beatrix Potter, Herdwick sheep, the Bluebird, the Old Man of Coniston… but what about the copper trail?

Copper is as fundamental to the story of the Lake District as Herdwick sheep are; without it, global communications and home electricity would not be possible. And yet, not many people know about this metal, its history, and the abundance of it that was discovered in Coniston.

Local artists Jessica Elleray and Siobhan Miles-Moore have been on a mission to raise the visibility of copper, boost awareness of its importance to the development of Coniston and the Lake District as a whole, and tell the story of the Lake District’s industrial heritage.

The result is the Copper (In Our) Veins art exhibition and sculpture trail.

The importance of copper

Copper (chemical symbol Cu) is one of the oldest metals man has worked with, with evidence of man’s interaction with the metal dating back more than 10,000 years. A hand-beaten copper pendant was discovered in modern-day northern Iraq that could be dated to 8,700BC.

Copper is particularly handy for humans due to its innate properties:

Copper in Coniston and the Lake District

Copper veins were “injected” into the Lake District landscape by a series of eruptions from super volcanoes and subsequent earthquakes, roughly 460 million years ago.

Fast forward until the 16th century when Queen Elizabeth I set up the Company of Mines Royal to work on the copper veins discovered in Coniston. Progress was initially very slow, with rockface openings and tunnelling all done by hand and primitive methods. The situation improved when the Queen imported expert German miners from the Tyrol and Bavaria regions of Germany, and then further accelerated when gunpowder was introduced towards the end of the 17th century. By the mid-1800s copper production in Coniston was at its peak.

By 1896 Penny Rigg at Tilberthwaite, round the corner from Coniston, was producing slate, and there were no longer any workers at the Coniston mine. The Coniston Mining Syndicate was wound up in 1908, and the last waterwheels were removed for scrap during the 1930s.

To celebrate the industrial heritage of the Lake District, as well as the story and importance of copper mining in Coniston, local artists Jessica Elleray and Siobhan Miles-Moore have teamed up. They’ve created a temporary Copper Sculpture Trail throughout the Coppermine Valley as well as an Exhibition at the Ruskin Museum in Coniston.

The Gilded Sculpture Trail features a variety of natural and man-made objects relevant to copper mining, all expertly gilded in copper. Objects include a series of copper-gilded horseshoes (which honour the pack horses who carried the copper ore), a pair of copper-gilded mining clogs (honouring the men who worked underground), and even a 6ft-tall 20-tonne boulder, known as the Heart Stone, completely covered in copper of course! And there’s loads more to discover around the trail.

The Ruskin Museum will also host an exhibition of painting and sculpture, which brings context to the outdoor work, expanding on the narrative and bringing insight into the artist’s underground experiences. For those who are unable to do the three-mile walk, a film and exhibition will feature in the Ruskin Museum to ensure nobody misses-out on the experience.

The trail will follow existing routes and will not be fixed into the ground or impede pathways. On completion of the exhibition in the Ruskin Museum on 5 October 2019, all items except the gilded stones will be removed, leaving no evidence of having been there.

In addition to these historical artefacts, Jessica and Siobhan got in touch with Herdy to see if we’d like to get involved with the Copper Trail and help raise awareness. Of course, we were delighted to take part!

The Copper Herdys have been exploring Coniston, the Ruskin Museum, and the Gilded Sculpture Trail in the Coppermines Valley.

And they’ve even gone as far as North Wales, exploring the mining landscape of Snowdonia and discovering what was once the largest copper mine in the world: Parys Mountain on Anglesey.

You can walk the trail yourself! Start from the Ruskin Museum and continue northeast and upwards on Coppermines Road towards the fells. The path will eventually join alongside Church Beck; just keep following it up until you reach the Coniston YHA. This is the start of the Gilded Sculpture Trail. Check out the handy map below.

The exhibition and trail will conclude on Sunday 6TH October, after which an online raffle will be held for the two adorable Copper Herdys! Funds raised from the auction of these Copper Herdys go directly to the Brathay Trust.

The Brathay Trust is a Lake District-based charity whose aim is to improve the life chances of children, young people, and families by inspiring them to engage positively in their communities. In the beginning, the trust helped get mill-working young men into the Lakes to enjoy the land, be inspired by nature and express their creative side, and endeavour to help them become more “well-rounded” characters.

This mission is still in practice today, and currently Siobhan and Martin of Miles-Moore Ceramics are Artists In Residence at the Brathay Trust, helping young people from urban areas to explore and express their creative side in a natural setting.

Keep your eyes peeled here or on our social media (Facebook, Twitter, or Instagram) for details about the Copper Herdy raffle. Draw will be held on 24th November 2019, get your chance to win these two Copper Herdys here.

All photos in this blog courtesy of Robin Cooper.