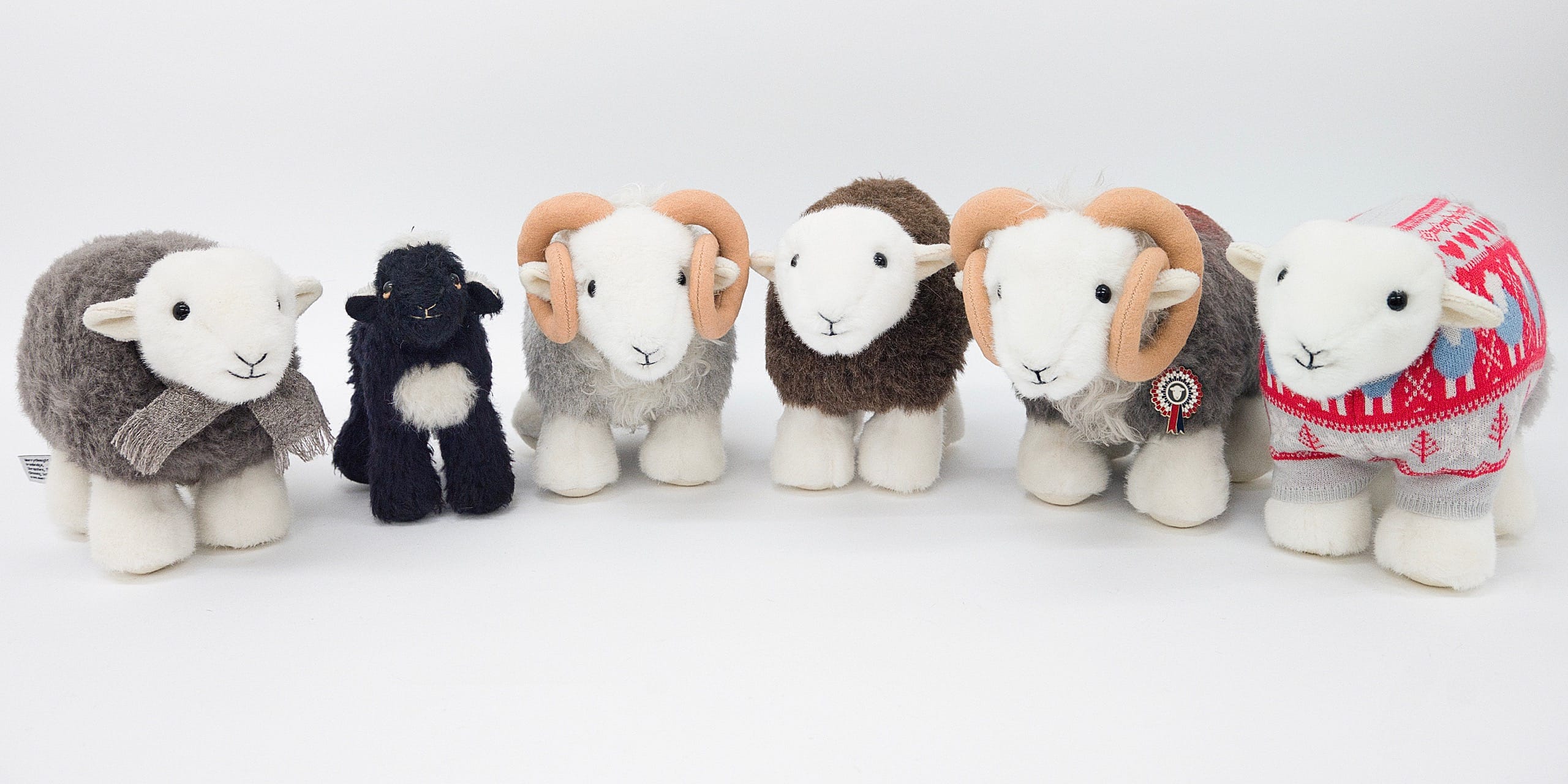 It’s the year 2013, and The Herdy Company is just 6-years old. We’d just launched a brand new website, supported Rannulph Feinnes’ Coldest Journey expedition, donated £800 of Herdy goodies to the Burneside Village brass band practice room fundraiser, and produced a Golden Herdy for the Stage 2 winner of the Tour of Britain. We were having a lot of fun.

Behind the scenes, plans were being made.

We had wanted to create a very special soft toy Herdy for quite some time. By the winter of 2013, the wheels for such a Herdy were set into motion. We knew that this special Herdy had to be made to the highest exacting standards of quality and craftsmanship and British made. That lead us to Ironbridge in Shropshire, home of the Industrial Revolution, World Heritage site, and the site of Britain’s oldest teddy bear manufacturer, Merrythought Ltd.

Merrythought was founded by William Gordon Holmes in 1930, but Merrythought’s roots began earlier.

Mr. W. G. Holmes set up a spinning mill in Yorkshire with business partner George Laxton in 1907, taking the best raw materials and spinning them into high quality wool and mohair yarn. Twenty-three years later Mr. Holmes diversified his growing textile company by founding Merrythought, creating soft toys and teddy bears using mohair his mill produced. The company launched its first catalogue in 1931 and, despite the outbreak of World War II, the company quickly became firm favourites with high-end retailers such as such as Harrods, Hamleys, and Selfridges in London.

After recovering from the war, Merrythought expanded their ranges and Bernard Trayton Holmes, son of Merrythought founder Gordon Holmes, joined the company. In the 1950s Merrythought became one of the first British toy companies to break into the European market; one of only six British companies that exhibited at the Nuremberg trade show in 1958.

Toy manufacturing started to fall onto hard times in the 1970s, primarily as a result of competition from Far Eastern imports and more modern toys hitting the market. Unlike other manufacturers, Merrythought survived—and even thrived—by maintaining production of high quality, traditionally styled teddy bears.

In 2010 Merrythought celebrated its 80th birthday and, by this time, were the last surviving teddy bear factory in Britain. Now a fourth generation business, the family tradition is being maintained with Sarah Holmes taking over the reins of the company.

The story of My Herdy

During the winter of 2013 we approached Merrythought with the idea of creating a traditional, handcrafted, British-made collectible soft toy, made with natural materials by hand to the highest standards of design and quality. We wanted to showcase the talent of British artisans.

Our design team were in their element, researching teddy bears, visiting Teddy Bear headquarters… talks went long into the night about textures, stuffings, hugability, likeness to our beloved Herdy, and of course quality.

“Merrythought more than lived up to their fantastic reputation of being special craftspeople by being able to bring our vision to life.”

Spencer, co-founder of The Herdy Company

“Our team couldn’t help but smile the whole time they were making the Herdys,” said Sarah Holmes, Director at Merrythought, “and had such a soft spot for them by the end of the project that we didn’t want to see them leave.”

The project took about a year of to-ing and fro-ing but by October 2014 the new Limited Edition “My Herdy” was launched with only 250 pieces made, individually numbered and packaged in a special box. Each one was beautifully hand made at the Merrythought factory from pure alpaca, a wool they use because of its softness and luxury feel. Each My Herdy also featured a carefully hand-embroidered nose and smile. This means that no two My Herdys were exactly the same and each had their own individual personality for people to fall in love with.

Spencer Hannah said at the time of launch, “We are over the moon with My Herdy. In this world of mass production, we’re delighted to have a very special limited edition, which we think epitomises the spirit of Herdy; he’s definitely made to make you smile and will be your friend for life.”

My Herdy was a bleating success and all pieces found new homes within 2 months of launch.

My Herdy, the family

Inevitably, soon after the launch of My Herdy, we received many requests from our customers to make a My Herdy Lamb. How could we refuse?

Much like the original My Herdy, the My Herdy Lamb had to be cute and also match the likeness of a real Herdwick lamb.

You see, Herdwick lambs are somewhat unusual in that they are born jet black, with perhaps tufts of white on their ears. Their appearance slowly changes over the following year; their faces and legs go white, and their fleece turns a kind of dark chocolatey brown. It’s only after they get their first clip (shearing), when they’re around two years old, that the staple grey fleece of the Herdwick is revealed underneath.

For My Herdy Lamb, we switched from using alpaca wool to the finest mohair fabric with wool felt details, lovingly handmade by the skilled team at Merrythought. We particularly loved his irresistible expression, looking up at you with those big eyes.

My Herdy Lamb launched in May 2015 and all 250 pieces, individually numbered and packaged, quickly found new homes and friends for life.

To round off the My Herdy family, we got to work with Merrythought right away on a My Herdy Tup. We were excited to see what Merrythought would do with the Herdwick tup’s curly horns.

In designing the “daddy” of the family, we had to decide whether to make him a true tup (ram) in every sense of the word. As we work with Herdwick Farmers and the Herdwick Sheep Breeders Association very closely, we knew that there are two features in particular that make a male Herdwick valuable! Our brief to our friends at Merrythought was to make My Herdy Tup “complete” with his two “most valuable assets”, something which certainly raised a smile from our farmer friends!

“It’s definitely the first time we’ve ever been asked to make a soft toy which is so anatomically correct!”

“We have always had such fun making the My Herdy collection pieces, and this one really made us all smile.”

We were thrilled with the result; My Herdy Tup, with his lovely curled horns and magnificent mane, was a beautiful and truly unique soft toy. Each one was lovingly handmade by Merrythought from pure alpaca. The finishing touch to each My Herdy Tup was his hand-embroidered nose and smile so no two were exactly the same.

My Herdy Tup launched in November 2015, and was immediately snapped up to make the Christmas of 2015 extra special.

My Herdy: a friend for life

In November 2016 we announced the launch of My Herdy Shearling, the “teenager” of the My Herdy family.

A “shearling”, “hogg”, is a sheep roughly 1–2 years of age. For Herdwicks this is when they go through their first major change. After being born black with tufts of white, their faces and legs gradually turn white, or “hoar frosted”, and their black coat softens into a chocolatey dark brown. Yows (ewes) still don’t get paired with tups at this age until after they’ve had their first clip (shear). This clip removes their brown fleece and reveals the standard Herdwick grey underneath, which gets lighter as they get older.

Think of them as Herdwick teenagers.

In 2017, after receiving lots of requests for us to re-release the My Herdy Tup, we launched My Herdy “Best In Show”: complete with enamel rosette, curly horns, his “two valuable assets”, and now with a “ruddied up” (raddled) fleece.

When preparing Herdwick sheep for shows it is traditional in the Herdwick farmer community to apply a thick red oily paste onto the sheep. The reasons for doing so are long lost in the mists of time, but there are couple of theories: first, that farmers and shepherds would apply the dye to their sheep in order to help spot them among the grey rocks in the fells; or secondly, it may have come from farmers noticing that Herdwicks would rub themselves up against rocks that happened to contain iron ore, which would redden their fleece.

For 2018 we wanted to raise a smile and celebrate one of the Great British Christmas Traditions, the Christmas Jumper. So in October 2018 we unveiled the new My Herdy “Woolly Jumper” limited edition collectible, complete with a hand-knitted woollen Christmas jumper to properly celebrate the festive season.

My Herdy & Merrythought: the future

It’s been a total joy and an absolute privilege to work with Merrythought on the My Herdy collectible soft toys. They have truly lived up to their high reputation as true artisans and craftspeople, and have brought Herdy to life in these wonderful My Herdy limited edition pieces.

Are ewe a proud owner of a My Herdy limited edition collectible? What would ewe like to see us and Merrythought create next? Let us know in the comments below, or get in touch with us on our Facebook, Twitter, Instagram, or email us.