Things To Do In Grasmere, Lake District 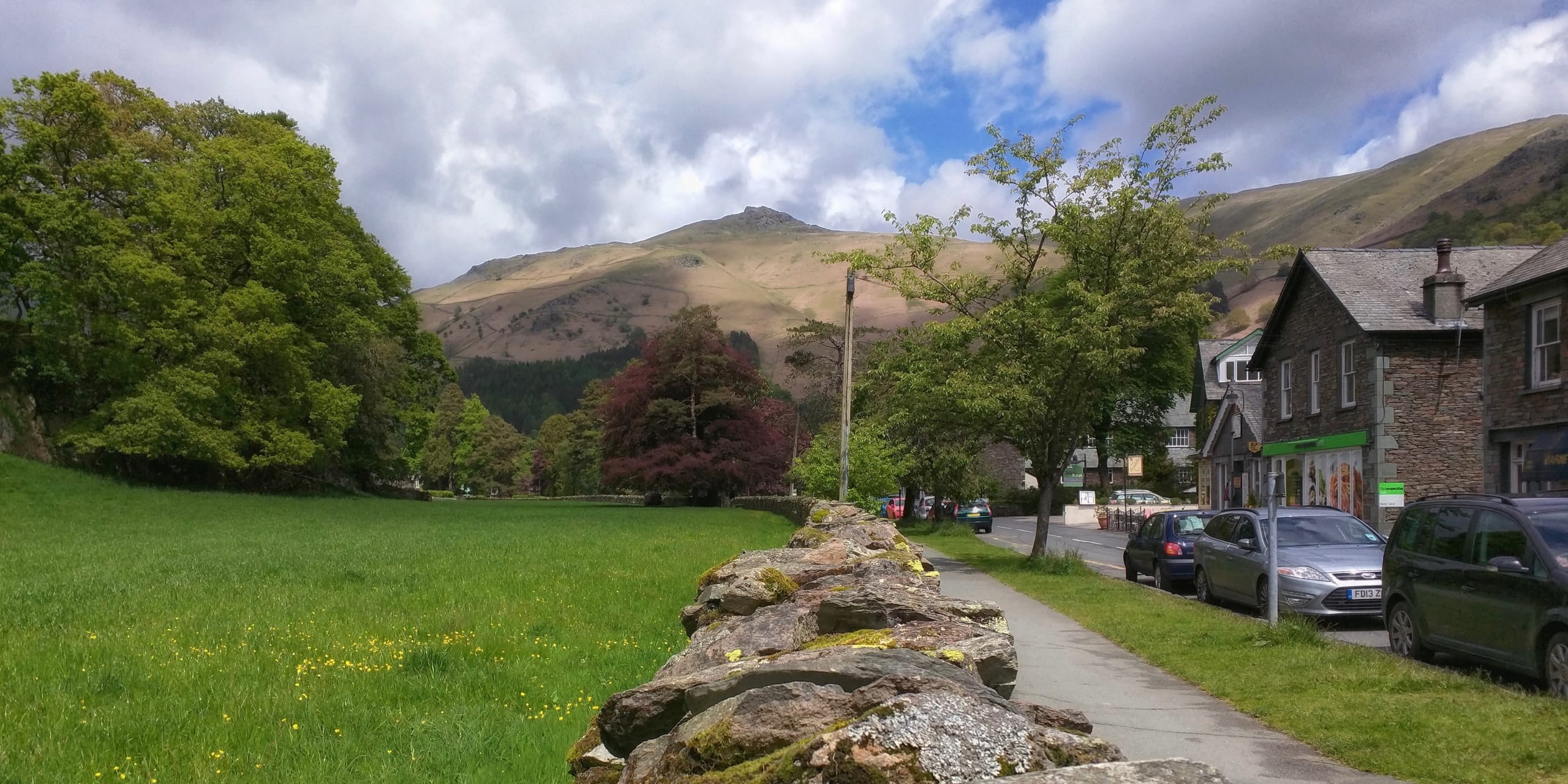 Are ewe planning a visit to the Lake District soon? If you are, you should think about adding Grasmere to your itinerary. This little village is found in the centre of Cumbria surrounded by wonderful scenery. There are a lot of things to do in Grasmere, so have a read of our Grasmere Guide to see why should you put it on your Lake District bucket list.

This was how William Wordsworth, major English poet of the Romantic Era, described Grasmere. It is probably one of Cumbria’s most well-known villages, thanks to Wordsworth and the famous Grasmere Gingerbread. Today, the village is totally equipped for the tourist industry, with plenty of gift shops, accommodation, and places to eat. Grasmere makes a great destination for both day trips and longer stays, with its stunning sights and fascinating links to English Literature.

Exploring the area around Grasmere

The village of Grasmere is adjacent to the lake which gave it its name. A short walk will get you to the magnificent lake which, especially in the early morning during summer, is truly breathtaking.

In the middle of the calm waters is a little island, known as Rawnsley's Island, where Wordsworth and his sister Dorothy used to picnic. The island belongs to the National Trust and is protected, so despite the availability of hired rowing boats between March and November, visitors should not try to land there.

The walk around the lake, which includes a short stretch on the A591, is easy and enjoyable all year around.

Grasmere is overlooked from the north-west by a rocky hill called Helm Crag, popularly known as The Lion and the Lamb. This name was derived from the shape of rock formations on its summit, and inspired our Special Edition Lion and Lamb mugs! While not high, Helm Crag is a steep climb so keep this in mind if you are considering giving it a go.

A number of other frequented walks begin in Grasmere, including a longer route up to Fairfield, a trail to Rydal Mount, and a moderate ascent to Easedale Tarn.

Places to visit in Grasmere

The most obvious of the places to visit in Grasmere is, of course, Dove Cottage and the Wordsworth Museum. A trip to the village would be incomplete without dropping into the Museum where you can learn all about Wordsworth’s remarkable life, from his childhood and experiences of the French Revolution to his immense lasting impact on literature. Within the museum you will find original letters, journals and manuscripts, as well as (rather randomly) a pair of Wordworth’s socks!

Dove Cottage is next door to the museum, and will give you a vivid idea of what life was like for the Wordsworth Family. William and his sister Dorothy moved into Dove Cottage in 1799 but had to move out in 1808 when the cottage had become inadequate for the size of the family and number of famous guests they welcomed.

It was within the walls of the cottage that Wordsworth produced his most well-known poems, and his sister Dorothy kept her famous Grasmere journals. Enjoy the rural and creative atmosphere of the cottage and gardens during a guided tour with passionate Wordsworth experts.

Who knows, you might even unleash your inner poet!

Reimagining Wordsworth—a redevelopment project funded by National Lottery Heritage Fund—will be taking place during 2019. As a result, the museum will be closed for the entirety of 2019. Dove Cottage too will be closed until 6th August. It will open temporarily before closing again at the end of October until Spring 2020.

Whilst Dove Cottage is closed, there will be a temporary experience held in the library: the Discover Wordsworth talk. This includes a filmed tour of Dove Cottage and an opportunity to explore the precious collections in the library. Check out the website to see how these changes will be running during the next year.

Another Grasmere landmark linked to William Wordsworth is St Oswald’s Church. Wordsworth died in 1850 while out walking. He and his wife Mary, who died nine years later, have a simple tombstone in the churchyard of St Oswald’s Church. Their grave is now one of the most visited literary sites in the world. Nearby are buried Wordsworth’s sister Dorothy, and his children Dora, William, Thomas.

The banks of River Rothay, on which the church is built, make a beautiful walk. The bit of land between the church and the river has been renovated and turned into a peaceful place called the Wordsworth Daffodil Garden. Here you can own a share, and have an engraved stone set in the pathway.

Other places of note in Grasmere include the Heaton Copper Studio, which is composed of three galleries to exhibit the work of the Heaton Cooper family of artists. There is also Allan Bank nearby, which is the house Wordsworth lived in after the family moved out of Dove Cottage. Although the house was damaged in a fire in 2011, it has been restored and is now home to a National Trust information centre. Inside you will find a small shop, café and a relaxed atmosphere. Each of the rooms of the house has been given a theme and there are plenty of interactive, creative activities which are ideal for children and Herdys alike.

During the summer months, the people of Grasmere celebrate tradition and art in three annual events. If you are in the area during this time, it would be well worth dropping by to take part.

From the end of July to early September the Lakes Artists Society Summer Exhibition takes place inside Grasmere Village Hall. Around 300 exhibits by local artists, sculptors and generally creative people, are on display every year. There is also an exhibition at Easter time.

Every year in the middle of July, Grasmere celebrates its Rushbearing Festival. This tradition dates back to when there was no floor to the church, so it was covered in rushes for warmth and cleanliness. Now, of course, the building has a permanent floor, but the village still celebrates this tradition with local children scattering rushes and flowers around the church.

The highlight event of the year for many is the Grasmere Sports Day, on Sunday 25th August. First held as an annual event in 1869, this is one of the oldest and most popular traditions in the Lake District. The games include Cumberland and Westmorland wrestling, fell running, and hound trailing, all set against the stunning backdrop of the Lake District. There are food stall tents and family activities. Herdy will also be there as part of our tour, so drop by our stall for some baaa-gains!

Grasmere, as our hardcore Herdsters will know, is home to the original Herdy store! Opened in 2010, the store has a special place in Herdy’s heart, so make sure you pop in to see where it all began!

Grasmere is a lovely place for a short shopping trip. The small village has lots of green spaces which, along with the beautiful stone houses, makes it a wonderfully relaxing place to spend a lazy afternoon.

Around the village you will find the majority of stores to be locally owned gift shops and cafes. If you are in need of a souvenir, some outdoor clothing, or a cup of tea (and cake!) after a morning walk, Grasmere will have you covered.

A particular favourite is the Sam Read Bookstore which was established by Sam Read in 1887. There are not many stores in the country that have such important literary connections, from Wordsworth, Coleridge and the Romantics, to John Ruskin, Beatrix Potter and EM Forster. The shop stocks a wide range of types and genres, so if you are after some holiday reading, this is the place to visit.

We couldn’t talk about Grasmere without mentioning Sarah Nelson’s Gingerbread. This delicious treat is unlike any other Gingerbread; it is like a powerful ginger shortbread, covered in sugary ginger crumbs. The Gingerbread has been made since the 1850s in Grasmere. It is made fresh everyday at Sarah Nelson’s Gingerbread Shop, which once was the village school for over 220 years. In fact, William Wordsworth, his wife and his sister all taught there in the early 19th Century.

Products mentioned in this guide 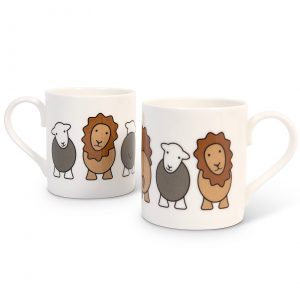 Get a Special Edition Lion And Lamb Mug!