Christmas On A Herdwick Farm 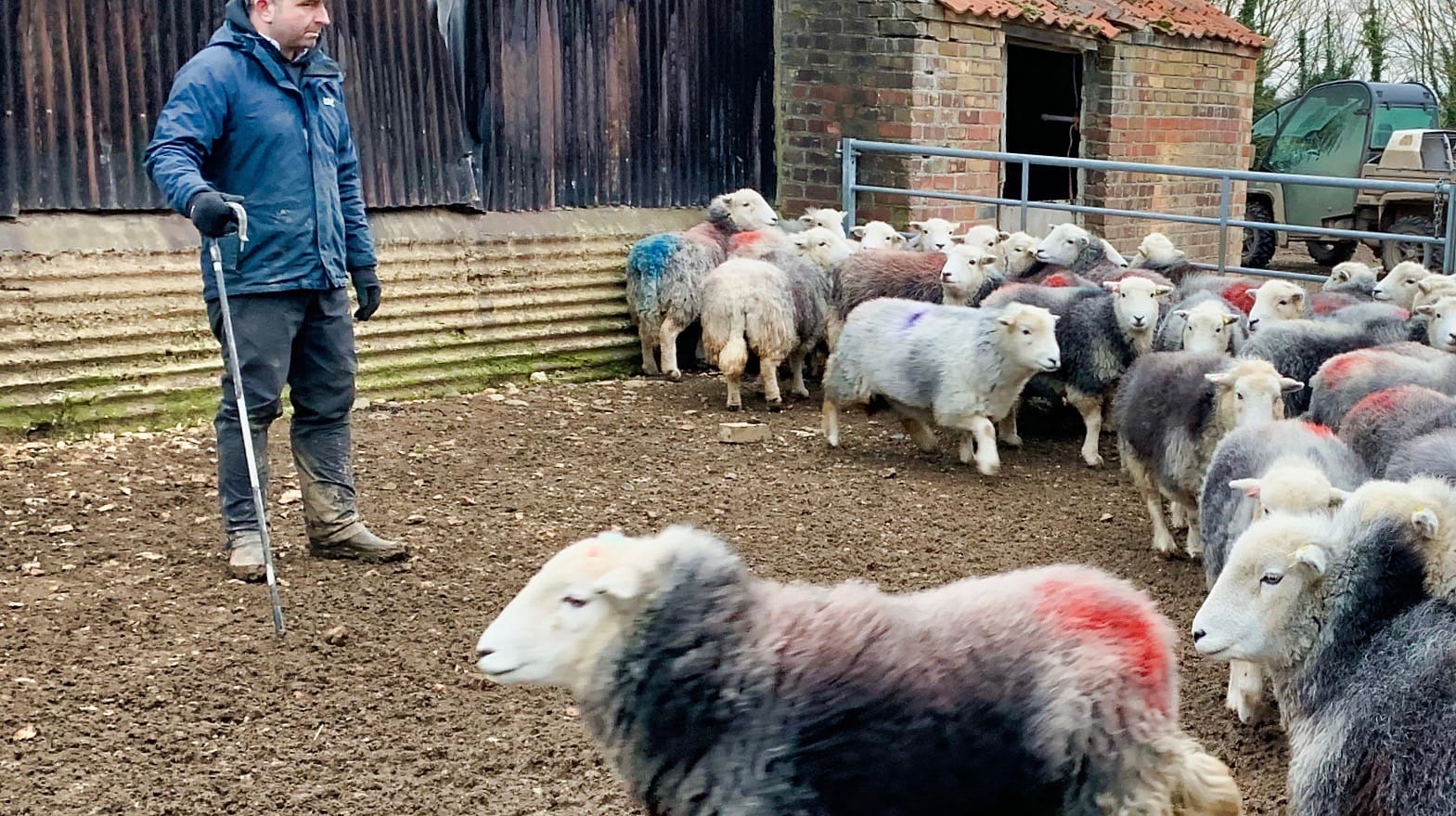 This guest blog was written by James Read, a Herdwick sheep farmer based in the Lincolnshire Wolds.

As you walk across the Cumbrian hills this Christmas, or for that matter anywhere else, you will probably notice most of the Herdwicks or other sheep have brightly coloured bottoms: red, blue, yellow, orange, the list goes on. This is because they have just been mated by the ram (male sheep) or—as we call it in the trade—they’ve been tupped (or, if you really want to use slang, “the tups are loosed”).

Mr. Read loosing the tups and sorting the ewes for tupping, looking dashing in his Herdy flatcap.

Most farmers will put paint on the tups’ breast plate or harness the tup up with a crayon attached. This then tells the farmer when each particular ewe has been served. The Herdwick’s mating cycle is around 14 days so after that time the paint/crayon will be changed to another colour, so the farmer then knows the ewe is on the second cycle. The farmer can also see if the tups are working properly or he can pin point with a colour which tup has served which ewe to breed the best show-winning animal.

I always think Herdwicks look fantastic with the combination of bright colours from the paint against their lovely slate grey wool shining in the autumn sun. Herdwick tups can serve up to 60-70 females over the breeding cycle, so if you think you’re having a great time at the office party this year drinking, dancing, etc., I can assure you Herdwick tups in the hills are having a better one!

On our farm in the Lincolnshire Wolds, where we have 300 Herdwick ewes, tupping time is coming to a close. We loose our tups at the same time as farmers in the Lakes do, as we get terribly cold North-easterly winds, so the later into April we lamb the better. Herdwicks have a 150-day pregnancy, give or take a day or two, so our last lambs should be born in mid-May.

Christmas time is much the same as any other time on a sheep farm: animals have all got to be checked, fed, and watered, just the same as any other day. On Christmas Eve I try and have a real good thorough look at everything and do any jobs that I think might want doing in the next 48 hours. On Christmas morning after Tom (our five-year old) has woken us at 5am to open his presents, I normally shoot round quickly to check everything. I tell Tom, before I leave to do my rounds, that no more presents will be opened until he’s fed the chickens, walked the sheep dogs with his Mum, and my poached eggs are waiting on the kitchen table (I wish!)

The sheepdogs always know it’s Christmas as my wife seems to have bought them every treat ever invented, and the pack can hardly control themselves leaping up and down in the kennels as Sal and Tom walk from the house. Probably my favourite bit of Christmas day is our afternoon walk with the dogs and all the family; special times that should be cherished.

This Christmas, Tom's had a great idea to give the Christmas tree a Herdwick theme. After showing his lamb at Eskdale Show he seems to have contracted Herdyitis, which is great to see, and it gives us all a break from his obsession with tractors! After getting third prize at Eskdale he had to stand up in school assembly and tell everyone about Derrick his Herdwick lamb; since then he has been a proud young Herdwick farmer.

How long our tree will be in one piece this Christmas is another story as we have a new arrival on the sheep dog front. His name is Will and he’s eight weeks old. He is the fluffiest sheepdog pup I’ve ever had, but to match the fluff he’s got the sharpest teeth and the toughest jaw I’ve ever seen! He can unwrap presents quicker than Tom or turn himself into the best lumberjack for domestic Christmas trees you’ve ever seen! Looks like I might have to put up with him sharing my armchair for a while as I’ve been told that he’s not allowed to go outside with the other sheep dogs for quite some time. Don’t know whether my household insurance policy covers fluffy little monsters though!

Anyway, have a great Christmas, think of the Herdy Fund, buy something Herdy, and spare a thought for us Herdwick sheep farmers, keeping British farming going and a fantastic sheep breed alive.