Where To Get Herdwick Products 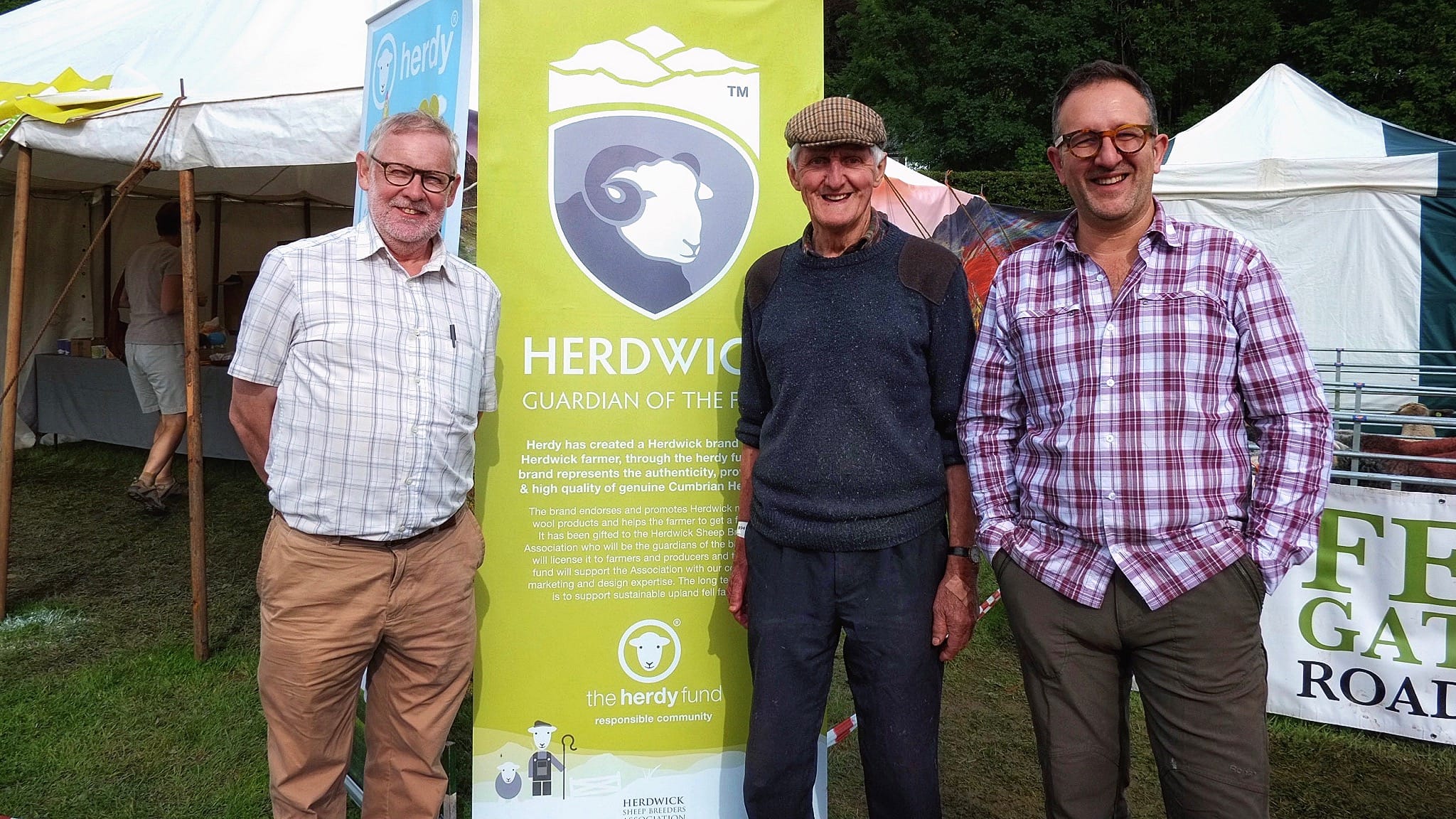 Back in 2014, when our hair wasn’t as grey and we had fewer wrinkles, we unveiled a herdyfund project we’d been working on: a marketing and knowledge-share project, the design of a quality marque that could be used in a variety of projects by lake district farmers, either meat or wool related Herdwick products, that aligned with the newly awarded PDO status granted to Herdwick meat (such as Herdwick lamb), and would work to safeguard the balance between the Herdwick sheep, the Herdwick shepherd, and upland fell farming into the future.

We then gifted the copyright and design to the HSBA (Herdwick Sheep Breeds Association) for them to safeguard and license. Legally, there has to be a legal exchange of contract so we “sold” it for £1. If you see the logo on Herdwick sheep gifts, you know that what you’re getting as a customer is a quality, ethical Herdwick product that directly benefits the upland fell farmers and their local rural economies.

Four years on, we’re delighted to see the fruits of this collaboration ripen…

Recently, the HSBA has started licensing out the Herdwick Marque to a number of local businesses who make good use of Herdwick products. This, in turn, has now started to generate an income for the HSBA, which is fantastic news and the reason why we created the Herdwick Marque in the first place.

Chimney Sheep, based in the west coast of Cumbria, use the thick and coarse fleece from Herdwick sheep to create draught excluders for chimneys.

“Some years ago I started noticing how many open chimneys there were. Having an open chimney is like leaving a window open all the time, and this seemed like a big waste of energy and money. I’ve always had a concern for environmental issues and thought that this presented both an problem and an opportunity. I knew that wool had natural insulation properties but was also breathable, which is important for chimneys, and so an idea was born. I experimented with a lot of different types of wool, and the Herdwick wool was the only one that really worked well. It is a very course wiry wool, which gives the “Chimney Sheep” the stiffness required to hold itself in place.

“It keeps warm air in the room, stops cold air from sinking down the chimney, and keeps out wind noise into the bargain. It also stops debris and wildlife from getting in. We’ve had it tested and it prevents around 5% of household heat loss, saving an average of over £50 a year off the typical heating bill.

“We buy 100% Herdwick wool from our suppliers, which comes on nicely felted rolls. However, farmers were saying it wasn’t worth their while taking the wool to the collection points, and a lot were burning it rather than the effort of delivering to wool merchants. I decided to collect Herdwick wool directly from local farmers, so that they would get a better price for it and not have the bother of having to take it to a collection depot. By cutting out a chain of merchants, the end price for the clean washed wool worked out better for us as well.

“Chimney Sheeps sell all over the world and it is nice to think that we are sending a little bit of the English Lake District to these far flung places. It is all about the functionality of the wool: the landscape is a consequence of our industrial heritage and the Herdwick wool Chimney Sheeps are a contemporary export of the region.”

Cable & Blake, based in Kendal, was founded by Rachel and Alice in December 2017, who took their combined love of the local Herdwick sheep and the Lake District landscape to create gorgeous fabrics (such as Herdwick tweed), lampshades, and upholstered furniture.

“The idea for Cable & Blake came up during a family outing to Brockhole - Alice was talking about Herdwick fleeces being burned due to their low value and I happened to mention that I could see Herdwick wool being a tactile but hard-wearing upholstery fabric. We realised our shared love of this iconic breed, my knowledge of upholstery, and Alice’s business acumen could combine to create a really good business.”

Cable & Blake source Lake District Herdwick fleece that’s spun into yarn and then woven on traditional looms at Farfield Mill in Sedbergh, Yorkshire Dales; the resulting fabric is then sent off for finishing (shaving, softening, dyeing and printing) before returning to Kendal. The local sourcing and manufacturing also keeps the carbon footprint way down.

“The fleece has great texture and depth, and we’ve found fantastic craftspeople who have worked with the fleece’s unique properties and helped us to create fabrics that are incredibly practical but also really pleasing aesthetically and texturally. There’s real satisfaction in taking something that has long been undervalued and transforming it into a highly sought-after product.

“We have worked really hard to produce fabric ranges that reflect the unique palette of the fells, lakes and valleys throughout the seasons. Our patterned range is a modern, abstract twist on classical Lake District views.

“We really wanted to connect with the (Herdwick Sheep Breeds) Association as we fully support their assertion that the cultural and socio economic systems (which have developed over hundreds of years and have helped define the unique characteristics of the Lake District) need support. When we get chance to take breath we’ll be exploring ways for Cable & Blake to work with other Association members - local collaborations are certainly of great interest to us.”

Wools of Cumbria Carpets, also based in Kendal, are another local company who make good use of locally sourced Herdwick wool to create hard-wearing, high-quality, natural tone Herdwick carpets for home and commercial properties. They also make carpets from two other Cumbrian sheep breeds: the Swaledale and the Kendal Rough Fell. WoCC promote upland fell farmers and local rural economies, and, in their own words, “for every square metre of carpet sold from our ‘Graphite’ and ‘Colourwash’ Ranges, we donate 25 pence to the respective Sheep Breeders’ Association.”

Back in the farmer’s pocket

Likewise, we’re delighted to work with the HSBA by buying Herdwick fleece direct from a co-operative of Lake District fell farmers for more than twice the market rate, which is then used in our supremely comfortable and luxurious herdysleep mattresses. People get a high-quality, English-made product that positively affects their physical health, and the fell farmers get a sustainable income from Herdwick fleece.

“The Herdwick Sheep Breeders Association Ltd (HSBA) would like to thank the Herdy Company for its support[…]The Herdwick is very special breed of sheep as it is a living example of our natural heritage producing food and fibre in an environmentally sustainable way[…]The HSBA has a vision to support the cultural and socio economic systems that have developed over hundreds of years through Herdwick farming, which have helped to define the unique characteristics of the environment of the Lake District[…]To find successful new markets for Herdwick products to ensure their sustainable future, the HSBA were awarded in 2013 Protected Designation of Origin (PDO) status. In a further demonstration of their pledge to support rural communities, the Herdy Company developed an exclusive Herdwick branding which will benefit all members of the breed society[…]The HSBA is grateful for the support of the Herdy Company and is looking forward to developing new initiatives and working in partnership Herdy in the future.”

What Herdwick products do ewe want to see in the future? Chat with us in the comments below, or join the flock on our Facebook, Twitter, Instagram, or email us. 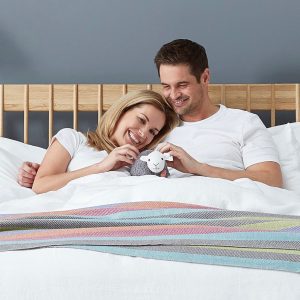