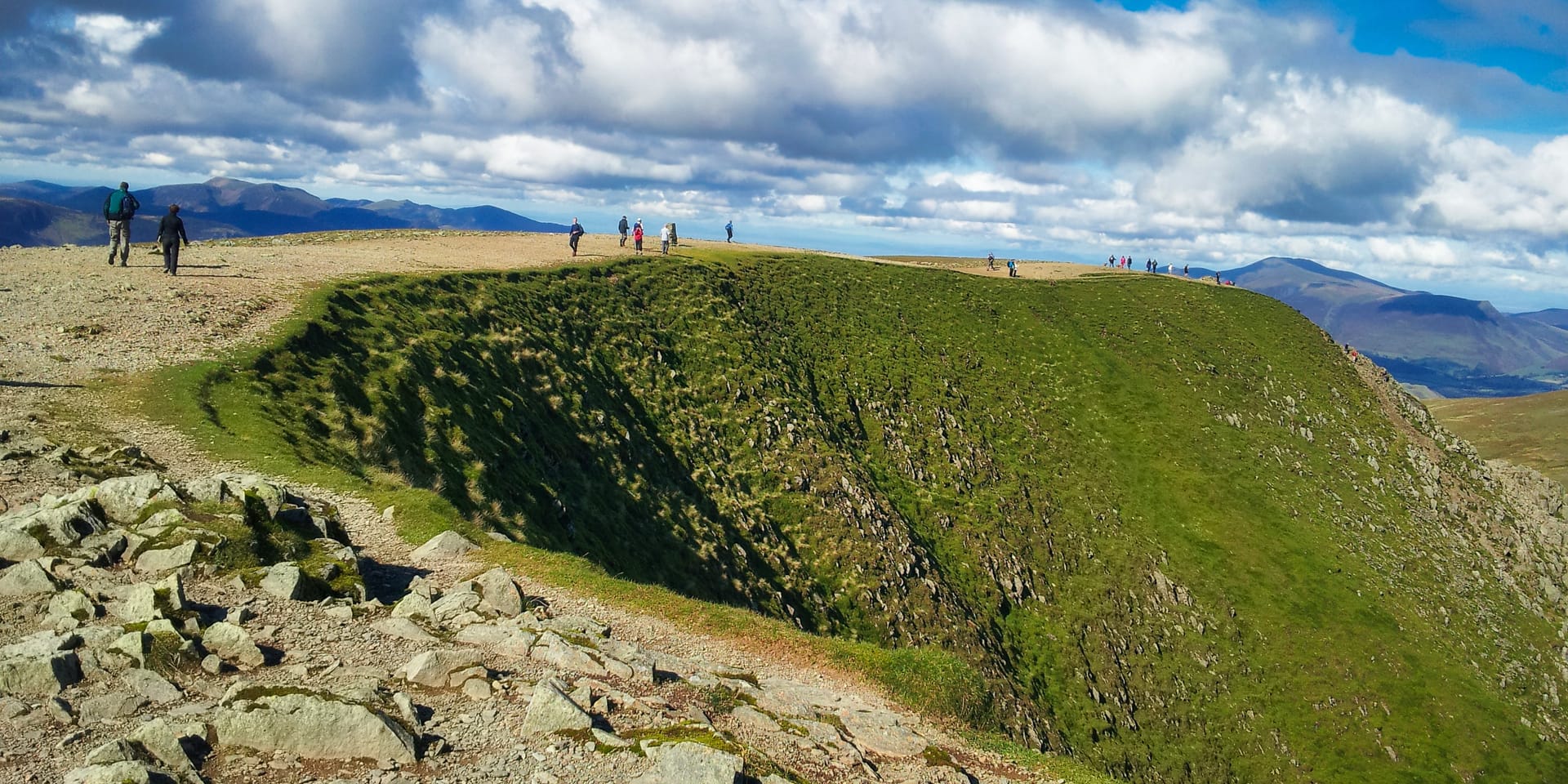 Few peaks in the Lake District capture the imagination and awe quite like Helvellyn. Perhaps it’s because of the summit’s ridiculously expansive views. Or maybe it’s to do with the thrill of tackling the mountain’s two famous knife-edge ridges: Striding Edge and Swirral Edge.

Helvellyn has enthralled local shepherds, early tourists, poets, painters, writers, and thrill-seekers alike for hundreds of years. To honour this famous mountain, much like we did with Scafell Pike, we wanted to share with you, dear reader, our favourite facts about this celebrated peak.

Helvellyn: the birth of a mountain

That may sound pretty old but in geological terms Helvellyn is a youngster. To compare, the mountains in the Northwest Highlands of Scotland, such as those around Torridon or in the Assynt, sit on a bed of Lewisian gneiss that is roughly 3.0–2.7 billion years old! The Black Cuillins on the Isle of Skye, by contrast, were formed around 60 million years ago.

Helvellyn is part of the Borrowdale Volcanic Group of rocks, and was initially formed as a result of a volcanic caldera (a “caldera” is a large volcanic crater, usually formed by a major eruption that collapses the mouth of the volcano).

Its more modern-day shapes and forms are heavily attributed to glaciation, back when the whole of North England was covered in an ice sheet around 28,000–14,700 years BP (before present). In those days Helvellyn would’ve presented as a nunatak; that is, a rocky island protruding above the ice.

More recent glaciation, occurring around 12,650–11,550 years BP, gouged out the coves and glaciated valleys to the north and east of Helvellyn’s summit, including the beloved Grisedale and Glenridding valleys, as well as Helvellyn’s two famous arêtes: Striding Edge and Swirral Edge.

Of course, Helvellyn has been shaped by human hands too. Sheep, including our beloved Herdwick, have grazed the land around the mountain for centuries; first as visiting summer flocks when transhumance was more common, then as more permanent flocks when sheep farmers and shepherds settled the Lake District from the Viking-era onwards.

What does the name mean?

A lot of place names and dialect in the Lake District and North England in general comes from Old Norse, the language of the Vikings. In fact lots of dialect terms in use are still quite cognisant with modern-day Scandinavians, especially in Iceland and the Faroe Islands (whose languages, Icelandic and Faroese, are most similar to Old Norse).

Old Norse is where we get words like fell (from fjall, meaning “mountain”), dale (from dalr, meaning “valley”), and foss/force (from fors, meaning “waterfall”).

But when we look at the name “Helvellyn” it doesn’t seem very Norse to us. In fact, it feels more Welsh.

This is because our best guess for its origins is that “Helvellyn” comes from two Cumbric terms: hal, meaning “moorland” or “upland”, and velin, meaning “yellow” or “pale yellow”, giving us the meaning “pale yellow moorland/upland”.

Cumbric was one of many varities of the old Common Brittonic language, which was spoken in North England and the lowlands of South Scotland, and is closely related to Welsh. It disappeared around the 12th century AD, probably as a result of the Kingdom of Strathclyde joining the Kingdom of Scotland.

Cumbric is where we get terms like caer, meaning “fort” or “stronghold” (and features in the name Carlisle); pen, meaning “top” or “summit” (such as in Penrith), and blaen, meaning “end” or “point” (and where get Blencathra).

The name “pale yellow upland” might seem a strange descriptor of Helvellyn. To understand you have to put yourself in the mindset of shepherds a thousand years ago. Shepherds learned to assess the nutritional value of grasses based on their colour, and this would factor in where to take their livestock for summer grazing. Helvellyn is known for grass that grows in areas where the snow lingers long into summer, and this type of grass—you guessed it—is a very pale yellow colour.

The flora and fauna of Helvellyn

Golden eagles were once known to fly around the mountain but unfortunately were long gone even in William Wordsworth’s time.

In terms of flora, the coves east of Helvellyn’s summit are known for remnant populations of arctic-alpine plants, which have arguably been there since the last Ice Age. These rare species include the Downy Willow (Salix lapponum), Mountain Avens (Dryas octopetala), the Alpine Mouse-ear (Cerastium alpinum), and Alpine Meadowgrass (Poa alpina).

Whilst local farmers and shepherds have known, loved, and worked around the mountain for many centuries, it wasn’t until the early 19th century that moneyed tourists started visiting and climbing the mountain for pleasure and leisure.

Some of the more well-known visitors of Helvellyn include Samuel Taylor Coleridge and William Wordsworth, both genre-defining Romantic poets and local residents (Coleridge for a time in Keswick and Wordsworth famously lived in Grasmere).

In fact a famous portrait painting of William Wordsworth by Romantic painter Benjamin Robert Haydon sets the poet against the swirling clouds on Helvellyn’s summit. Wordsworth, his sister Dorothy, and Coleridge would visit each other by traversing the mountain en route.

Another Romantic artist heavily associated with Helvellyn is painter Charles Gough. Unfortunately the association isn’t to do with his work but with his untimely death. Gough visited the Lake District from Manchester in April 1805 and decided one day to walk over Helvellyn to Grasmere. His body wasn’t found until three months later by a shepherd near Red Tarn, underneath Helvellyn’s summit. It’s assumed that Gough attempted to traverse Striding Edge and fell to his death. His dog, Foxie, stayed by his corpse until he was discovered three months later.

In December 1926 a small aeroplane landed on, and took off from, the summit of Helvellyn. The aeroplane was flown by Bert Hinkler, a test pilot who worked for A. V. Roe, a plane manufacturer near Manchester.

There are many ways to ascend Helvellyn's summit, but arguably the most popular route is via one of Helvellyn's knife-edge ridges: Striding Edge.

Striding Edge is an arête, which is basically a narrow ridge of rock that separates two valleys. There are in fact five ridges that radiate out from Helvellyn's summit, but Striding Edge is perhaps the most well-known and notorious. In terms of UK climbing grades the edge is not technically challenging, but its popularity attracts hill walkers who can be ill-equipped and unprepared for the sudden changes in weather conditions on the fell tops.

Even experienced fell walkers and mountain climbers have come a cropper on Striding Edge before now.

First, a disclaimer: before tackling this route you must ensure you have the necessary equipment and knowledge. That means:

Let close friends or family know what time you'll be setting off on the walk and what time you expect to return.

To start the walk, parking can be found at Glenridding (///classmate.shaves.accented). Walk back onto the main road and head south. After about a mile, as you're heading into Patterdale village, you'll see a sign and turning for "Lane to GRISEDALE" (///sailors.shipyards.sweeper). Take this lane and follow it for a kilometre as it ascends up into Grisedale valley. Eventually the lane ends at a gate (///skews.plugs.teeth) and you'll see a sign pointing right to Helvellyn. Turn right here, cross the bridge over Grisedale Beck, and start ascending up the valley side. The path then turns left (west) and starts climbing up the valley side. This is the route to the "Hole-in-the-Wall" (///spreads.host.increased).

Once you reach the Hole-in-the-Wall, which is named rather literally, climb over the stile. This marks the start of the scramble up on Striding Edge towards the summit of Helvellyn. Take your time, watch your footing. If conditions change for the worst, or you don't feel confident scrambling in exposed conditions, there is no shame in turning back.

Helvellyn was voted the 2nd most popular peak in the UK, behind Tryfan in Snowdonia, Wales, according to Trail Magazine and its readers.

During winter, December through to Easter, the Fell Top Assessors hike up Helvellyn every day to report on fell conditions for hikers and climbers.

Have ewe been up Helvellyn?