Clipping Time, Or Shearing A Sheep 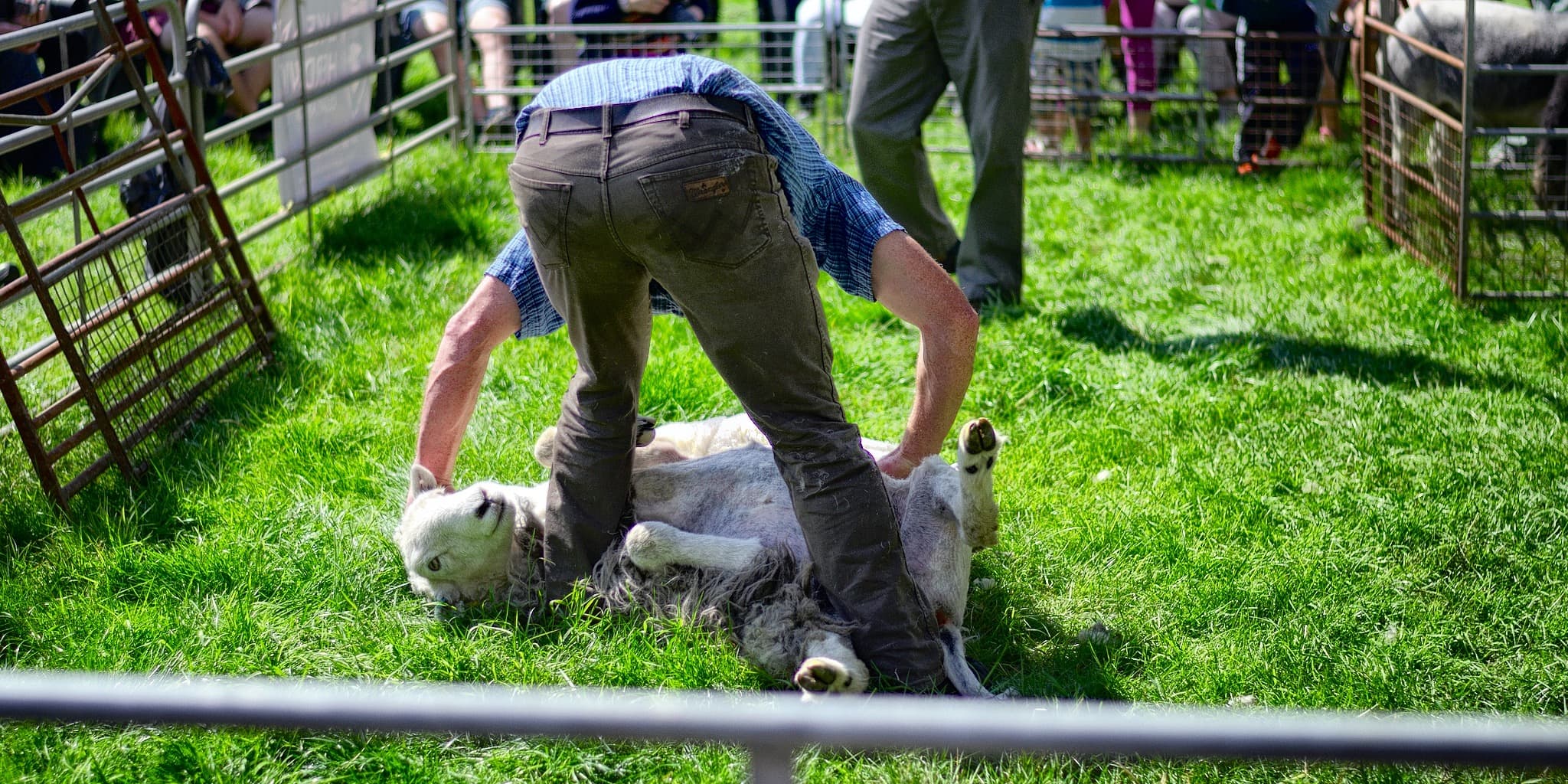 Farmers clip (you might call it “shear”) their sheep in the first or second week of July (weather allowing). The right time to begin shearing sheep on any given farm varies depending on the breed, the weather, and how “forward” the land is. Because Herdwicks graze some of the hardest mountains in the UK they are some of the last sheep clipped. Whilst Texel or Suffolk sheep in the lower land might be clipped in May, a few Herdwicks are clipped before July, but many are clipped in July, August or September.

Shearing sheep for their wool

Once, wool was a key cash crop from Lake District farms, with wool being a major part of the income. They say caravans of horses or donkeys led bales of wool across the Lake District fells to Kendal (which was built on the wool trade) until the 19th century. Much of the wealth of the monasteries that owned much of the Lake District in the Middle Ages was created from wool.

Today Herdwick wool is sold for less than the price it costs to pay someone to shear the sheep.

It costs roughly £1 to get a sheep clipped, and the Herdwick wool is worth 41p per kilo (a fleece weighs a couple of kilos). So farmers don’t count on wool generating anything more than a token payment. Some years they don’t bother to sell it because the price is so bad.

Others have burnt it.

Apparently synthetic materials can be produced much cheaper than wool, can be washed, and manufactured, and Herdwick wool is wiry, dark, and hard (which makes it ideal for sheep on mountains, for tweed type jackets, insulation, or carpets that last for a very long time, but less than ideal for competing with fleece and other man-made products).

Shearing sheep for their welfare

If you look at old pictures of Herdwicks you will see they had more wool because sheep, like everything else, respond to market incentives; Lakeland farmers have bred sheep with less and less wool as it has become worth less.

So clipping time is not about making money anymore but is instead more about getting the wool off to tidy up the sheep, and helping their welfare.

Some Lake District farms have lots of trees and woodland so you get lots of blowflies and bluebottles that will prey on any sheep with dirty patches of wool and lay their eggs. You don’t want to know what maggots can do to a sheep but it’s part of the summer work to prevent this. By late June the flies get worse and worse, so there’s a real urgency to get the sheep clipped so they can look after themselves better.

Clipping day was always, and still is, a collaborative activity, with many farmers working together as a team to clip each other’s sheep. Today, electric clipping machines are used but it is still bloody hard graft, and as many helpers as possible is a good idea.

Lots of young, and not so young, shepherds earn their keep through the summer in gangs of shearers that travel from farm to farm doing the work. The work is hard but the banter is fantastic, and some farmers wives still compete with each other to put on the best clipping time tea (no one has the heart to tell them that being full of cakes and scones is not great when you have to bend double all afternoon).

A good shearer can shear as many as 400 sheep a day (some more) but 200 is a fair score, and would break most people. So a team of 4 men can shear well over a 1,000 in a day. And that requires a whole bunch of other people to gather the sheep, sort the lambs off, push the ewes onto the clipping trailer, wrap the wool, mark the sheep after they are sheared, lead the batches of sheep away and generally keeping things moving. Traditionally you would also dip the sheep to prevent flies soon after clipping.

Shearers get paid by the sheep, so they do not appreciate standing around whilst you go get the next lot of sheep, because time is their money. It’s the time of year when tempers are short but everyone soon calms down, and the work gets done. This a is a frantic time, but good fun, with the buildings alive with the hum of the shearing machines, sheep bleating, dogs barking, and men shouting.

Sheep have to be dry to be clipped, and many are sheared in fields with mobile clipping trailers being erected.

The only thing wrong with clipping time is that wool, one of the great products of the world, is sold for so little.

Have ewe ever seen sheep getting sheared?

Have you ever been to a Shepherd's Meet or Sheep Show and seen sheep getting clipped? Have you ever worked with raw fleece? Let's have a natter in the comments below or join the flock on our Facebook, Twitter, or Instagram, or email us.