Learn All About Herdwick Sheep 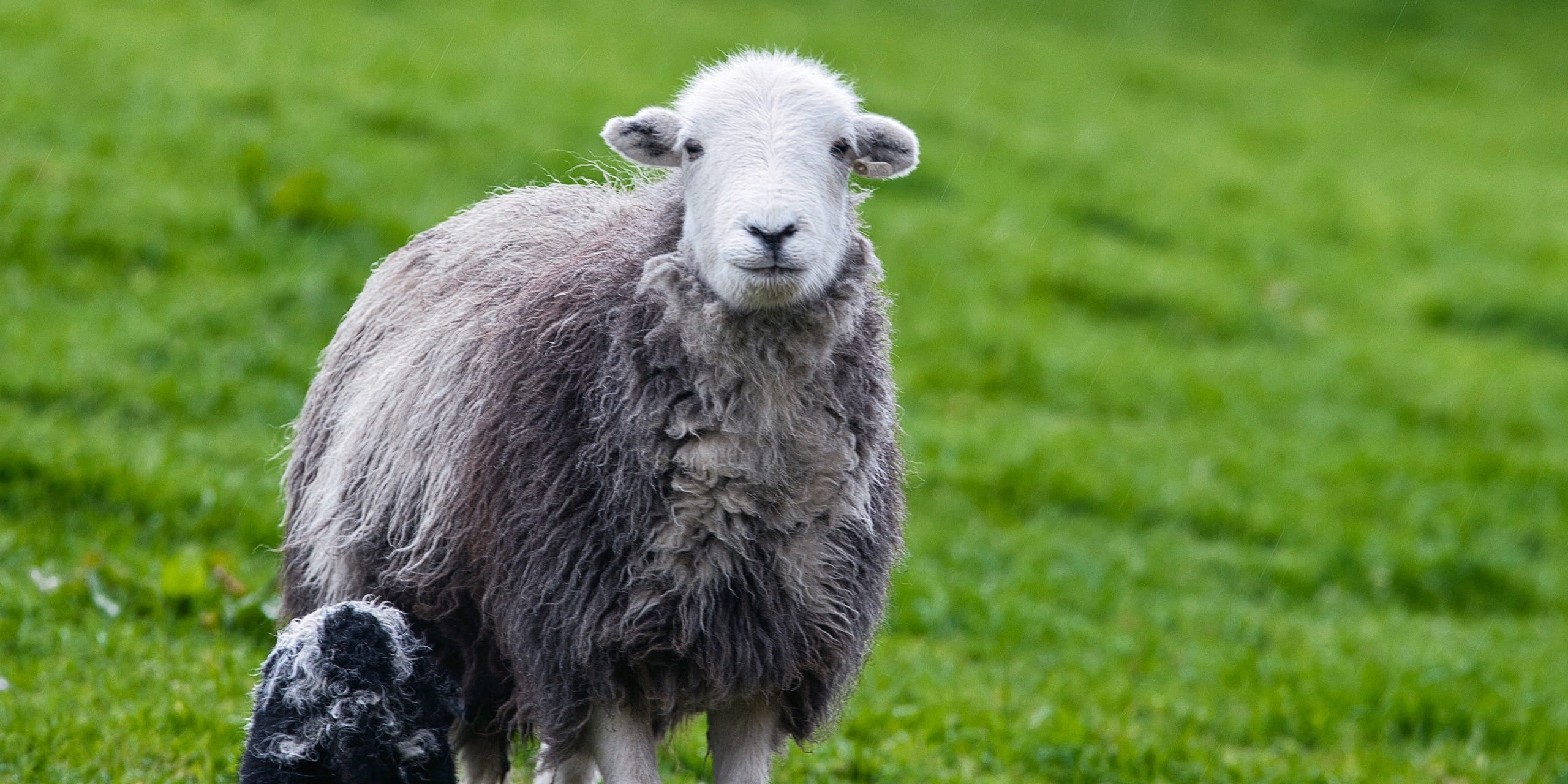 To understand the way Herdwick sheep are farmed in the Lake District today, it’s best to look at its historical roots.

From the first settlers to the present day, anyone seeking to farm the Lake District has to find solutions to some daunting practical challenges; particularly the tough climate, the large areas of unfenced common grazing land on the fells, and the small areas of cultivatable or better quality pasture land in the valley bottoms. Herdwick sheep and the way that they are farmed is the result of thousands of years of cultural development to address these challenges.

If you thought Herdwicks were just “pretty sheep”, think again.

Where do Herdwick sheep come from?

Herdwick sheep have been in and around the Lake District for centuries. Their ancestors go back to the first known domestication of sheep—about 10,000 years ago—when sheep from Southwest Asia migrated to Europe.

Genetic analysis has shown that the Herdwick descends from the Northern Pin Tail group of sheep that were possibly introduced to Britain around 5,500 years ago.

This same group includes other uniquely British breeds, such as:

That same analysis suggests that the Herdwick remained isolated in the Cumbrian fells, little influenced by other breeds, and thus retained many characteristics of the Northern Pin Tail group of primitive wild sheep.

The name “Herdwyck” is recorded in documents dating back to the 6th century and comes from Old Norse—the language of the Vikings—meaning “sheep pasture”. It remained as a name in the Lake District to describe farms; a “Herdwick of sheep at Lawson Park” is recorded in 1564AD, where sheep were let with the farm. In time, the term became associated with the mountain sheep on these farms: Herdwicks.

Local myth connects the Herdwick to the Vikings, whose invasions and presence in Cumbria influenced the culture and language of the Lake District in the 9th century. It is possible that they also introduced sheep and brought with them their own farming practices. Interestingly, genetic analysis has shown that Herdwicks share a rare genetic trait with Texel sheep, the Island of Texel being close to the Viking trading stronghold of the Waddle Sea.

Do Herdwick sheep stay on the fells during winter?

Before the Lake District was permanently settled by small farmers, it was a place people brought their flocks—on foot—to graze in the summer months, with the shepherds living in temporary shelters called shielings. This is because the Lake District fells and dales (valleys) can carry more livestock in the summer—when the grass grows—than in the winter.

Today, this tradition continues in a different form: many of the younger Herdwicks (lambs and shearlings) are “wintered” away on low coastal areas or in the Eden Valley—where the grass still grows throughout the winter—before returning in the spring for the first growth of upland grass. Young adult tups and yows (rams and ewes respectively) who are strong and healthy will go back to the fell tops during winter and graze with minimal assistance, despite all the rain, wind, and snow. Older or pregnant Herdwicks tend to stay in the in-bye land where they can be cared for more easily.

Lake District farms tend to have a small amount of privately owned/managed “in-bye” land in the valley bottoms—divided by dry stone walls—as well as large areas of commonly grazed fell land, called “in-take”. Each Lake District Herdwick farm is granted commoner grazing rights for a set number of sheep on any given common, set by custom to reflect the grazing capacity of the fell.

This is a system that requires rules and customs to prevent abuse, cheating, or mismanagement. Before mobile phones or email the only way that people could work collectively to manage this landscape was to have agreed traditions and practices that governed how the sheep and land were managed, making clear what everyone was supposed to do, when, and how. Travelling by road from one side of a common to the other to collect a stray can be as far as a 90-mile round trip.

Gathering the flocks of sheep from the common land requires mutual cooperation between farmers, with tradition dictating how the fells are gathered and when. Many farmers and their sheepdogs work together to divide the task and ensure that the work is efficient and effective.

Whose sheep is it anyway?

Each farm has ways of identifying its sheep so should any stray, or be mistakenly gathered to a neighbouring farmstead, they can be identified and returned to the rightful owner.

There are two traditional kinds of identification:

These marks are set by tradition and have been registered in A Shepherd’s Guide for the past 200 years. A stray sheep is identified by these marks and detailed rules dictate how it is to be reunited with its owner.

Special holding pens, or “penfolds”, exist around various common lands for holding strays until the owners are notified. Shepherds meet at set times during the year at a series of “Shepherd’s Meets”, where they exchange stray sheep, judge the quality of their peer’s sheep, and socialise. These events still take place and are an important part of the shepherd’s year.

Homing sheep and the “Heaf” instinct

Herdwick sheep flocks were historically managed in such a way that the sheep know which bit of the fell they are supposed to graze and—unlike most other sheep breeds—they keep to this “heaf”.

All wild and feral sheep have a strong female “homing instinct”, and this natural instinct has been encouraged in certain flocks to become the management practice known as hefting or heafing. Each generation of sheep pass this knowledge of belonging onto their offspring. Because these unique sheep have this in-built homing instinct it would be disastrous if the flock were sold when a farmer retired. Herdwicks can graze specific areas of a fell without the need for fencing as they don’t wander for miles.

It is especially strong in Herdwicks that graze Common land, to the extent that the sheep stay with the farm when the farm is sold or changes hands (“landlord flocks”). The sheep very much belong to the land, and are literally the living culture of the farming people of the Lake District.

The way that Herdwick sheep look is mostly down to selective breeding over the centuries. These are practical, hardy sheep designed to cope with the Lake District landscape, and their key attributes reflect this. The white faces and horns—only in the males—are distinctive characteristics of the Herdwick’s roots from wild Northern Pin Tail breeds.

Breeding processes over the centuries have created an animal that is ideally suited to its environment. Herdwicks survive extreme winters better than any other breed because they have evolved and been selected to be tough. Herdwick sheep are primarily bred today for meat, so the physique of a Herdwick is important.

Herdwicks start lambing a little later in the season than most other breeds; usually around the start of April. The reason is simple: the season for growing grass in the Lake District is short, so tupping and lambing is timed in order for Herdwick lambs to be born just as the grass starts to grow.

Most ewes lamb in the first 2–3 hours of daylight, so the mornings become a blur of running round ensuring that things are OK. When the ewe’s waters break it’s fairly safe to leave them alone for maybe an hour to lamb naturally, then return and check all is well. Too much interfering can make matters worse, too little and lambs can die or be abandoned.

The older ewes know exactly what they are doing, and many will lamb themselves in a sheltered place and get their lambs suckled. Some of the younger ewes get confused and stressed, and are a bit hopeless. They might lamb in exposed, wet, and windy places, not let their lambs suckle, or can even be scared by their own lambs and run away. Though Herdwicks have more native sense than most modern breeds, they still need skilled shepherding in this hard country.

When the lambs are born the first few hours are critical to their prospects. It’s essential that they get enough of the yellow creamy colostrum milk that carries the antibodies and nutrition they need. Thankfully, Herdwicks are full of vigour and get-up-and-go. Within minutes many lambs are on their feet, but they are also quite capable of stumbling into a beck or stream so shepherds sometimes move them and their mothers to convenient sheltered places where they can’t get into bother. Any lambs that aren’t full of milk will be brought back to the barns and tubed with milk from their mother (or artificial substitute).

In this community both the farming families and the sheep have been rooted to this place for centuries. Many of the practices and traditions survive here because the unique geography has preserved a kind of farming that has been swept away across much of the rest of Western Europe. Wordsworth called it a “perfect republic of shepherds” and thought it a model of how people might live everywhere.

Poets, writers, and painters have been inspired by this landscape and its people, and have shaped the way that people around the world think about landscape and conservation. This is why the Lake District is now a UNESCO World Heritage site, recognised internationally as a “cultural landscape”.

We hope that now that you know a bit more about these wonderful sheep and the people that manage them, that like us you’ll want to support them. Herdwick sheep and their shepherds really are the “guardians of a cherished landscape”.