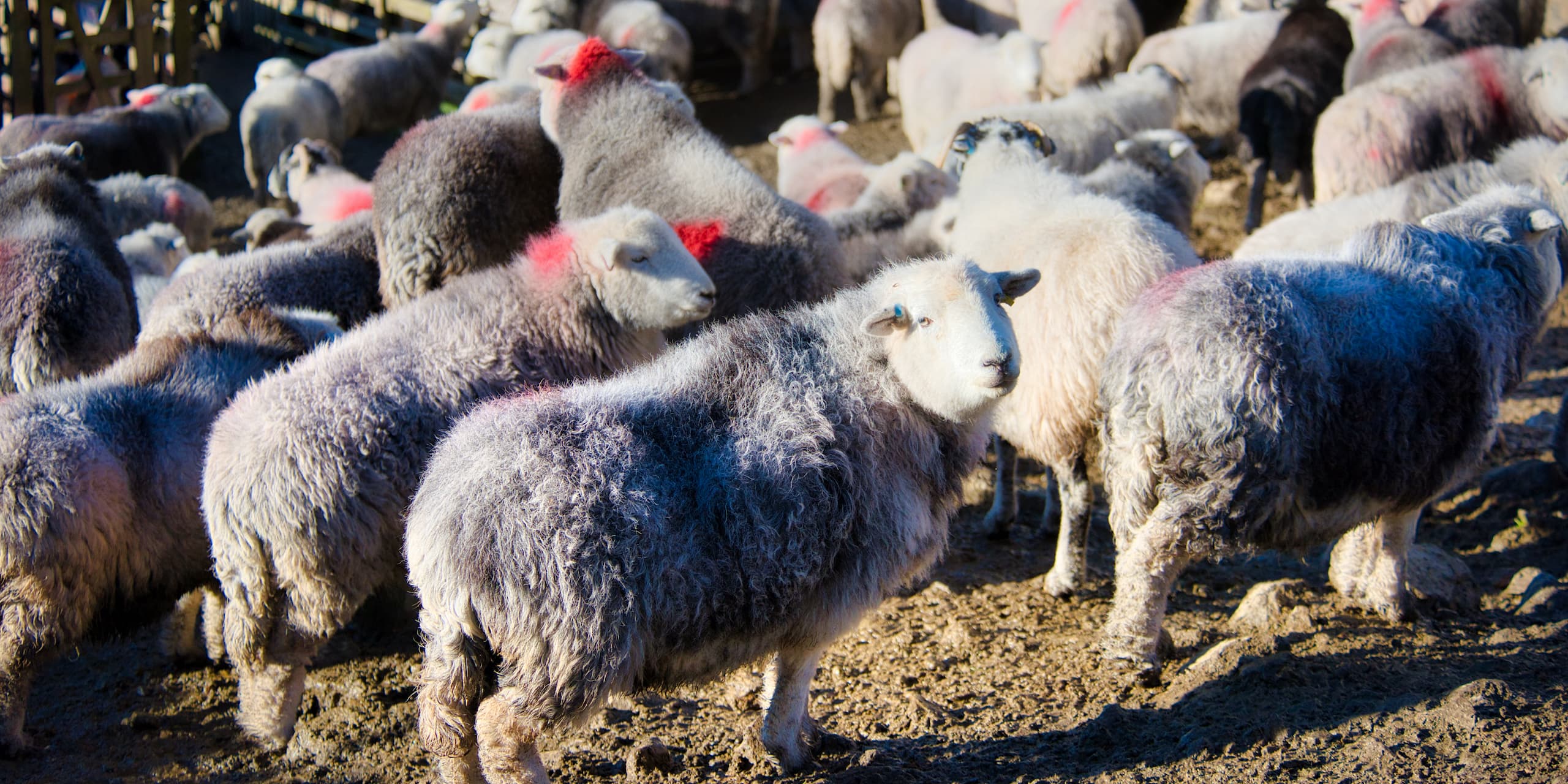 Way back in pre-history someone worked out that there were two smart ways to identify sheep. Herdwick sheep are identified by lug marks (ear notches) and smit marks (coloured markings on sheep, comprised of stripes and spots of different colours in different places).

Herdwick sheep are the native breed of the Lake District, as they live on the fell (mountain). They are extremely hardy; as a result, they can be safely left on unfenced terrain and will not usually wander off their traditional heaf. Ewes teach this behaviour to their lambs.

Quite often due to this unique grazing nature they become mixed (not least during gathering when the flocks are brought down by the shepherds working together), so they need to be identified by their shepherds. Traditionally, in the Lake District, this is done with lug marks and smit marks.

Horned sheep have another form of marking that is to burn a mark into the horn, a painless procedure. This however is not used on Herdwick sheep as the ewes have no horns (sheep with no horns are said to be "polled").

These coloured markings on sheep are recorded for each flock on each farm in a journal called The Shepherd’s Guide. Because the fells are free range with no fences, some sheep can stray large distances, so to work out who’s sheep you have discovered, a shepherd consults The Shepherd’s Guide and then informs the rightful owner according to custom and rules. This ensures that the right ewes and lambs return to their native heaf and not the wrong fell where they would not settle.

If this was a free-for-all it would be chaos, so this is where rules were developed for the management of the fells. Each flock has its own lug and smit mark that identify individual sheep to their farm; these have to be sufficiently clear and distinctive from other marks.

For hundreds of years The Shepherd’s Guide has been published, which sets out the marks for each flock (some farmsteads have more than one flock of sheep and manage several different marks to keep their individual flocks separate from each other). They comprise breeds like the native Herdwick, the Swaledale, and some cross breeds.

The sheep are marked regularly throughout the year to ensure that everyone can identify them, but particularly after clipping when the old mark is lost with the fleece. Nowadays, oblivious to the fact that shepherds have had this covered hundreds of years previously, EU regulations insists that all animals are traceable to their farmstead for food safety reasons and stipulates that every sheep has to have a microchipped tag with 14 digits and a farmstead official number (two tags for adult breeding sheep).

Did ewe know about smit marks?

If you've always wondered why some sheep seem to be "spray painted", now you know! What else do you want to know about Herdwick sheep in the Lake District? Let's chat in the comments below or join the flock on our Facebook, Twitter, or Instagram, or email us.