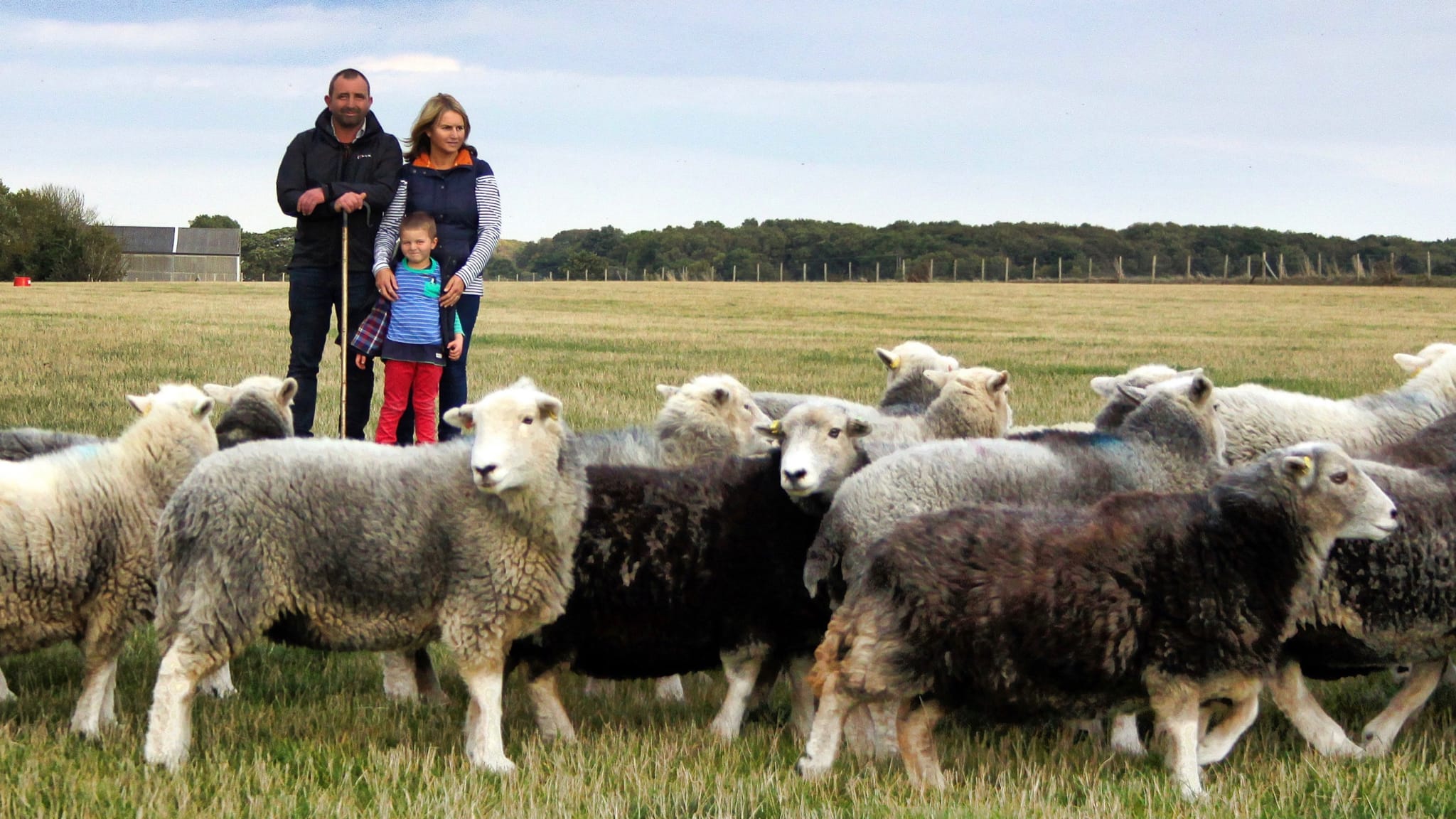 The guest blog post below was written by James Read, a Herdwick farmer and sheep dog trainer based near Louth in the Lincolnshire Wolds.

I am a fifth generation farmer who farms in the picturesque Lincolnshire Wolds near the town of Louth. Our farm is 400 acres of a mixture of arable crops and livestock, which includes 250 Herdwick breeding ewes. I am also a keen sheep dog trialer, and train and sell sheep dogs for extra income on the farm.

Herdwick sheep outside of the Lake District

The Lincolnshire Wolds is probably the last place you would imagine Herdwick sheep to be farmed but with our rolling hills and the chalk soils the Herdwick sheep seems to be quite at home here. Obviously the climate and the hills are nowhere near as dramatic as the Lake District, but with our cold Northeasterly winds and the grass on the chalk soils not quite as lush as some parts of Britain, it makes the ideal habitat for a hardy breed such as the Herdwick.

I discovered Herdwicks about eight years ago when a friend of mine, Katy Cropper, lent me some to train my young sheep dogs on. Herdwicks are great for young sheep dogs because they are such an independent breed; they don’t mind being on their own so they spread out more from the flock, which brings out the herding instinct more in a young dog and makes them “tuck the flock in”, as you might say.

My wife Sally is also a massive Herdwick fan and over the years has encouraged me to buy more and more of them. Now, eight years later to Sally’s joy, the Herdwick is the only breed we have on the farm and our fields are full of their little white faces. We do sell quite a few Herdwick lambs to other farmers for their wives for Christmas because of their idyllic looks, which brings me on to the Herdwicks other little trait: ESCAPING!

You can put a Herdwick in a lovely green lush grass field, but if it gets in its head the idea that it doesn’t want to be there it will escape. They can be very naughty and they are the Houdinis of the sheep world. Some of the farmers I have sold Herdwicks to have often phoned me to say their wife’s Christmas present is nowhere to be seen and it turned up in the next parish.

This story takes a bit of believing but I was once helping my friend who has a few Herdwicks on his small holding. We were worming his sheep when two of them shot under the gate and off down the village. It was early spring and the Herdwicks were full of spring grass. They then decided to dart off up someone’s driveway. Said owner of the drive then appeared out of his garden waving his garden hoe at the sheep, so they then decided to run around the corner and straight through his front door that he had left open in the spring sunshine. Luckily the bloke found the funny side of it as my friend and I had to retrieve the two naughty Herdwicks out of his living room!

The next generation of farmers

I have a five year old son, Tom, who is hopefully going to be the sixth generation on our family farm (no pressure of course!) Tom is obsessed with tractors, like a lot of young lads, and he can tell you every make, model, and horse power of every tractor ever built. To be honest he hasn’t really taken much interest in the sheep although he thinks it’s great fun if we have to assist a ewe at lambing time, and has quite often had a go at pulling a lamb out. For the first time this year he has shown more interest in the sheep and has wanted to show his pet Herdwick lamb.

Sometimes, although it is quite rare for a Herdwick, the ewe will have triplets. This year, not knowing what was going on with her pregnancy, a particular ewe rejected her third lamb. So, with us lambing the Herdwicks outside and it being a cold dull April day, we had to take the poor cold rejected lamb into the house next to the Aga. Tom fell in love with the lamb straight away and named it “Derrick”. Later that evening Derrick was doing well, having drunk his milk replacement, so I decided to tip him up to see what sex he was. To my surprise Derrick was a girl and I explained to Tom that we would have to change her name. Tom, of course, was having none of it and stuck with Derrick, so as a compromise Sally and I suggested “Bo Derrick” (1980s actress).

The tradition of showing Herdwick sheep

We go to quite a few agricultural shows during the summer. The farm can have its quiet times when the lambs are all weened and the ewes are clipped, we get a bit of family time together. There is nearly always a sheep dog trial that I compete in alongside the agricultural shows. When Tom starts showing sheep it will not only bring his competitive side out, it is another thing that we can do as a family.

Tom has competed a couple of times showing Derrick/Bo Derrick the Herdwick lamb, and done very well in what’s called the Young Handlers. The judges probably focus more on the child than the sheep, asking the youngsters questions about their sheep. Tom is quite bold and like a lot of other five year olds can talk for England, slipping the odd tractor in here and there! The parents job is to make sure your child and sheep are well turned out, both of which having a good shampoo the night before. Mum ironing his white coat, brushing his Herdy flat cap, and Dad polishing his boots and tying the Windsor knot in his tie.

Our next show to parade Tom and Derrick/Bo Derrick is the Eskdale Show, which we are quite nervous about, as it will be the first time competing against other Herdwick lambs. Coming from Lincolnshire we will be the “under dogs” . I’ve done a bit of homework and I think Derrick will have to have a good face wash and a bit of a manicure, pulling out any black hairs from his face. The children don’t have to wear a white coat or tie there but we will still be making sure Tom is turned out well with no chocolate or breakfast around his mush. We are really excited about venturing out of Lincolnshire with our Herdwick lamb. Tom is very competitive already at only five (don’t know where he gets that from!) and it would be good to get a win under his belt, but it will be down to Tom and Derrick/Bo Derrick to bring home the Red Rosette as there is no sheep dog trial at Eskdale for Dad to win.