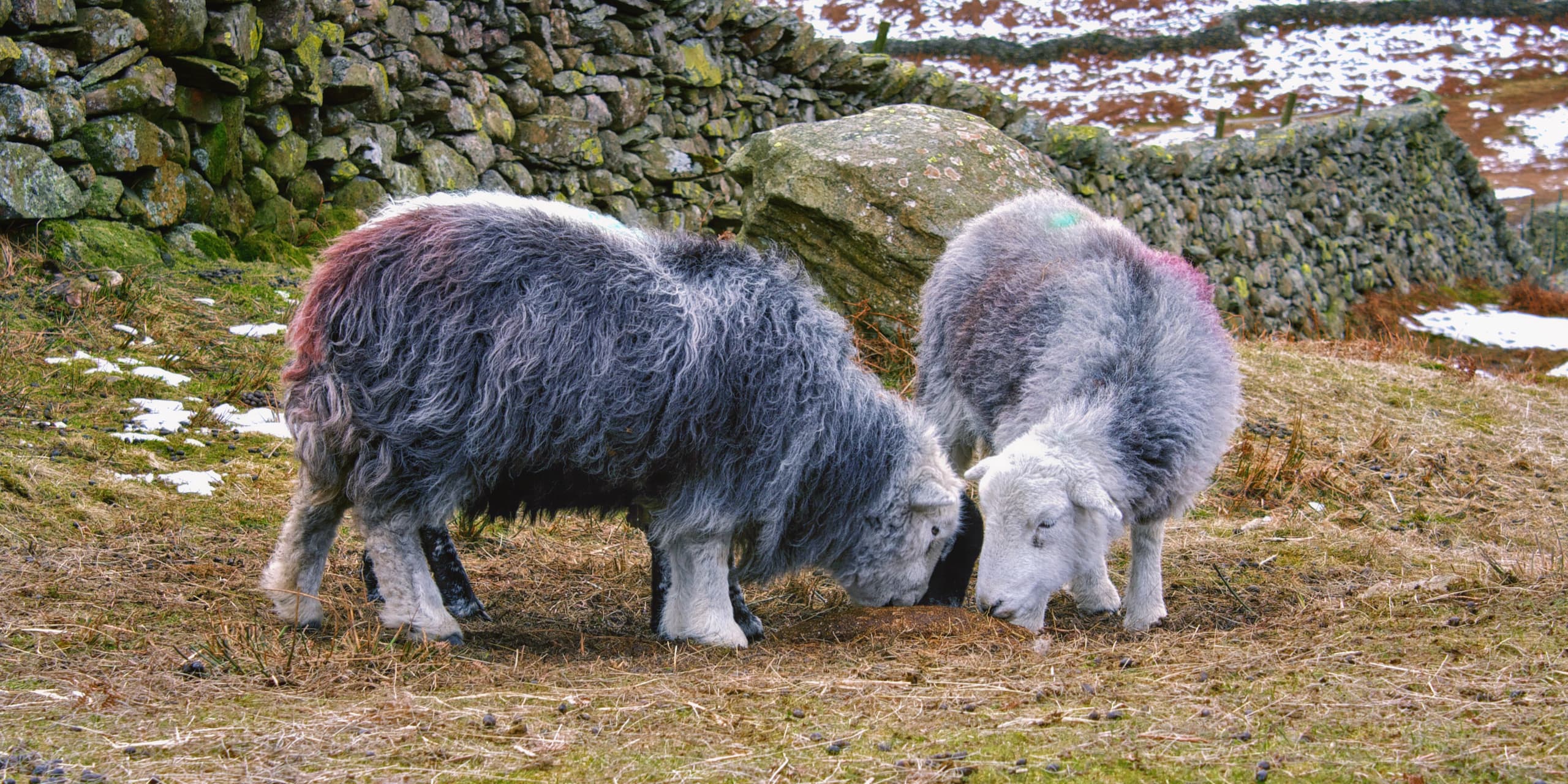 The weeks from Christmas until March are the longest, greyest, wettest, snowiest, and most testing of the year. They are the weeks when Herdwick sheep come into their own because in late winter on a Lake District Herdwick farm, the extremes of weather are more prevalent. Few other breeds of sheep would survive the winter here whilst carrying lambs in their bellies.

During this time the ewes are becoming heavier in lamb and their need for nutrition grows. They need hay and—in the final weeks—some supplementary feeding (either from feed blocks or concentrated feed).

Different kinds of weather have different effects on the ewes. The worst kind is deep snow that freezes, either trapping the ewes beneath drifts or forming a hard layer that stops them getting anything to eat. Some of the oldest farmers talk of Herdwicks surviving for weeks in snow drifts during extreme winters, and more of them surviving than any other breed. They’ve been known to eat their own fleeces to survive. But persistent wet weather can also affects the ewes badly.

Late winter: scanning for Herdwick lambs and managing the land

By March farmers have to be vigilant for any issues with the pregnant ewes; they scan (ultrascan) in January so they know which ewes have single lambs in them (these ewes can, by and large, look after themselves with some hay), and which have twins or triplets in them. Ewes with twins or triplets need more help as they are at risk of twin lamb disease (Pregnancy Toxaemia): this is a metabolic condition where the sheep’s energy levels are not being met, leading to nutritional deficiencies and, if untreated, death.

Scanning is a blur of activity as the person scanning gets paid by the sheep, so you have to be organised. They glare at a fuzzy grey screen, with one hand under the ewe’s belly, shout “single”, “twin”, or “triplet”, and a mark is quickly sprayed on the sheep’s back.

Lower hill ewes average about a lamb and a half each; any more and there can be too many problems. A young hill ewe can manage fine with one lamb but two can be problematic on marginal land. Ideally you don’t want triplets as it inevitably means little lambs that are at high risk of suffering from bad weather or needing to be taken off the mother at birth so she can have enough milk to rear the remaining ones.

Farmers try to manage the land so that some fields can freshen up with spring grass for the ewes and lambs in early April. They look nervously at the pile of big bales of hay, because the heap shrinks rapidly through the cold weeks and starts to look like it will run out. Most years it lasts into April with a little bit left, then the grass finally starts to grow and you curse having any left at all.

There is no better smell on a cold winter’s day than some good meadow hay: you can smell the summer in it. It’s a reminder of how critical the meadows in the valley bottoms are to farms.

The return of the wintered lambs

In early March the gimmer hoggs (last year’s ewe lambs) come back from their winter grazing.

Many centuries ago people travelled with the sheep (transhumance) but these days you commute to shepherd the sheep. Some graze down in the Eden valley but other young Herdwicks winter as far away as Anglesey. They have done this for countless centuries and need to because of the lack of grass on the fells in winter; they need to grow up somewhere where there is sufficient nutrition.

The gimmer hoggs come back nice and fat with their heads and legs whitening nicely, maturing to look like their mothers. Their fleeces are still the colour of black chocolate.

This is also the time of year when Lake District farmers market the wether lambs and tup hoggs (last year’s male lambs that don’t make the grade as breeding tups). Farmers feed them to fatten them, and wait for the peak price; some years they get to £96. It’s tough for farmers to decide how long to feed the wether lambs as it can cost up to £12 per month. You are never sure whether to cash them in or hold on for a higher price. Herdwick hoggs tend to be marketed from February to April.

If you’d like to support what Lake District farmers do, then the best way is to pester your butcher or supermarket to stock Herdwick, and then buy it. Otherwise this great and distinctive meat simply disappears into the food chain as generic “lamb”. And that just seems a waste of something special.

Happily, you can also directly support the Lake District farmers directly by donating to the Herdyfund, a charitable fund started by Herdy and now managed by the Cumbria Community Foundation.

But above all, throughout these weeks, farmers are quietly excited by the promise of lambing time when, despite all the hard work, they will start to see the quality of the lambs and whether judgements about breeding were right or wrong.

Lambing is due to start around April 1st.