New Herdwick Lambs: May & June On A Herdwick Sheep Farm 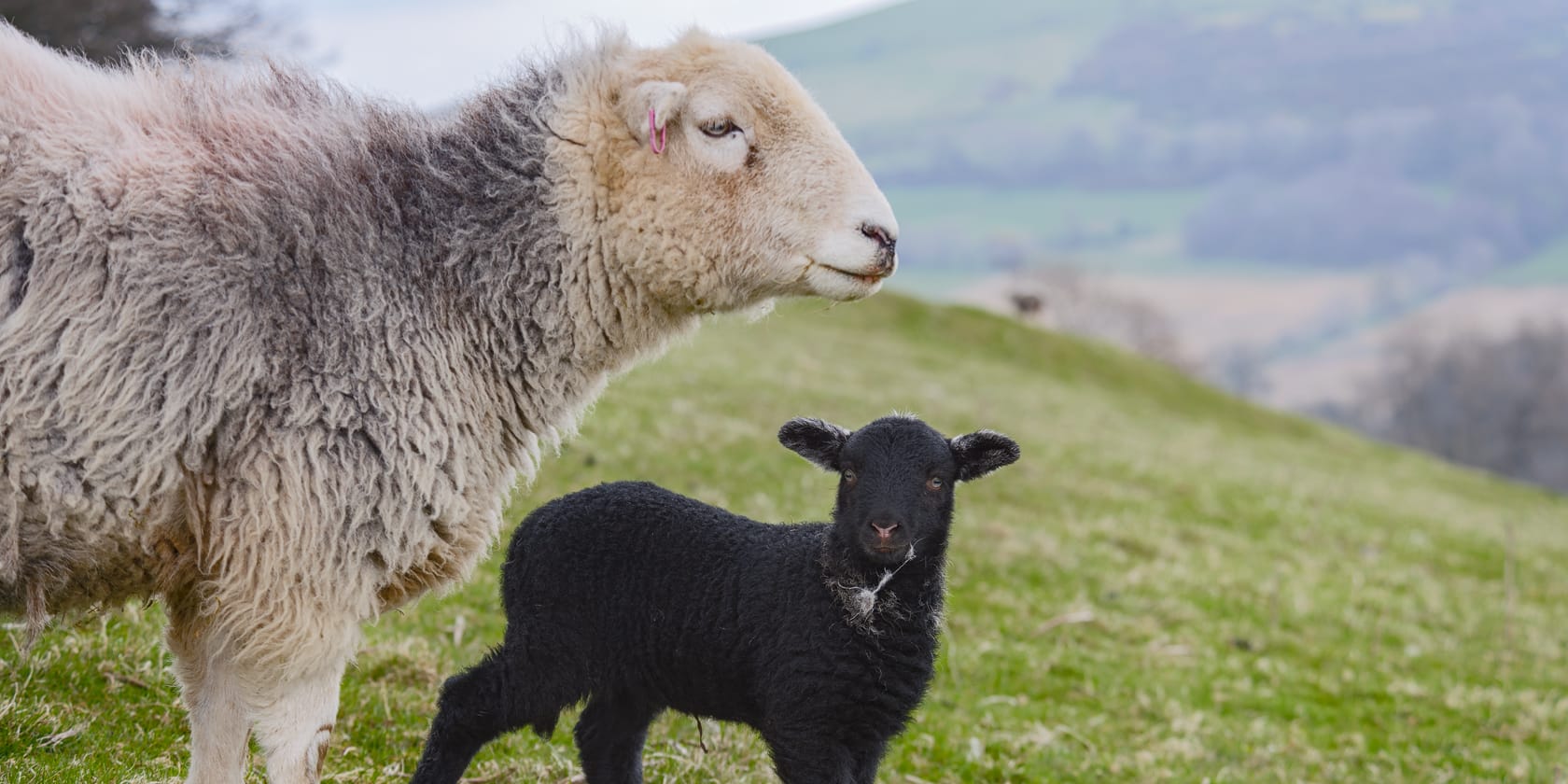 There isn’t really a quiet time on a traditional hill farm, but the nearest Lake District fell farmers get to one is in May and June after the new Herdwick lambs are born. It’s not so much that there isn’t lots to do, there is, but compared with the stress and work of lambing time it seems easier, and the grass growing and sun shining lifts your spirits so it’s a pleasure to work outside again.

It’s like the farm has come back to life, and when the grass starts to grow you don’t have to worry about the sheep getting enough to eat and milking their lambs. However, a cold snap in May can cost some ewes and lambs who struggle with the shock of it when they are in full milk.

When the last lambs are born and strengthened up, farmers are suddenly able to chill out a bit, and need not check them every hour or two.

In May it’s time to gather into the sheep pens the fields full of ewes and lambs that have been in the valley bottom meadows. The valleys echo with ewes and lambs calling for one another as they get themselves temporarily muddled up and un-mothered.

The lambs all have to be “doctored”, that is, injected with vaccines for preventable illnesses, wormed with an oral drench (as the parasites come to life again with the warmth), marked with the farm’s flock “smit mark” with greasy paint, tagged with their two 14 digit micro-chipped tags (a legal requirement), and notched in their ears to show which farm they belong to.

With hundreds of lambs that’s quite a lot of work, and lots of opportunities for mistakes. People talk about “easy-care” sheep, but the truth is all sheep need fairly regular maintenance and monitoring. A spray is used to stop blowflies laying eggs on sheep as in June and July some would be “struck” without this and would eventually die a horrible death.

New Herdwick lambs learn about their new home, their heft

Herdwick lambs that go to the fell now start to learn to hold to their “heaf”, because their mothers return to the area on the fell where they were born and reared, and teach their lambs the same attachment to place. If the lambs didn’t go to the fell and learn like this, the system would break down.

This “hefting” system allows the Lake District, with its massive areas of common (unfenced and collectively farmed) land, to be farmed. Each farm has a “stint” on the common or multiple commons and an agreed number of sheep that can graze that stint. This was based historically on the numbers of sheep that could be grazed on the valley bottom land in the winter months. Traditionally this system was managed by peer pressure and by “courts” where offenders were punished. Today it is dictated by Natural England.

Herdwick sheep stay with the farms through changes of tenancy or ownership, because they are “heafed”, and it is in everyone’s interest that they do. So the sheep on one farm are descendants of the sheep that lived on that same land, and the surrounding fells, centuries, maybe even thousands of years ago.

The farms left by Beatrix Potter, and others, to the National Trust have “landlord flocks”, which makes Trust the owner of thousands of Herdwick sheep. A Lake District fell farmer’s job is to keep this going, and pass it on intact.

Farming the Lake District revolves around one simple reality: the short growing season for grass on the fells.

Farmers take advantage of this growing season in just the same way that the first settlers did maybe 5,000 years ago. Farmers time lambing season so that the lambs hit the ground as the grass starts to grow. The lambs are reared through the green, lush, and pleasant summer and autumn months when their mothers will get enough nutrition to milk them, then sold in the autumn in good condition before the growing season ends. That’s when the farm’s carrying capacity reduces massively.

By December at latest the farms can only carry the core ewe flocks with some help from farmers feeding them the summer’s crop. So, in May and June, the valley bottom meadows are cleared of sheep, the walls repaired, and the sheep kicked up the hill to the new grass. The meadows are allowed to flower and spurt into life. Soon they are lush green carpets of grass which will be made into hay (or haylage) in July or August.

Then, farmers breathe a sigh of relief that they have reached spring (about three months after Southern England) and have a little fun by attending, and maybe showing, at the Spring Tup (Ram) Fairs at Keswick and Eskdale. Traditionally these were gatherings when the borrowed tups were returned to the breeders/owners after being used by others. But they were probably always social occasions as well, and a chance to catch up with old friends and have a beer or two. Keswick Tup Fair happens on “the Thursday after the third Wednesday in May”… Figure that out! Before mobile phones and email, the shepherds in the different valleys had to know a set time when they met up, so such rules emerged.

The proudest thing you can call a shepherd is “a good stockman”, and winning a tup fair is one way to show your skill. It is also a serious business showcasing your tups that will be for sale in the autumn. This year (2012) the Keswick Tup Fair was won by the Blands from West Head, one of the biggest and best Herdwick farms, and one of the oldest Herdwick farming families.

Did ewe know about all the ways Herdwick lambs are cared for? And the unique "hefting" system of the Lake District?